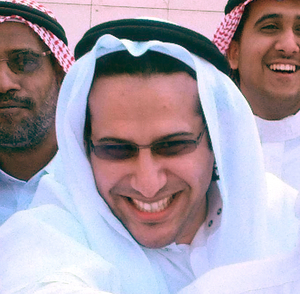 On January 12, 2015, Waleed Abu Al-Khair had his sentence upheld upon appeal. He was initially sentenced to 15 years in prison but was to serve only 10. However, the judge ordered him to serve the full 15-year prison sentence because he has refused to apologize for his “offenses.”

Waleed Abu Al-Khair is a Saudi Arabian lawyer, human rights activist, and founding member of the Monitor of Human Rights in Saudi Arabia (MHRSA). The author of numerous articles, he is the recipient of the 2012 Olof Palme Prize. His clients included the blogger Raif Badawi.

Waleed Abu Al-Khair was arrested on April 15, 2014. On February 4, 2014, Saudi Arabia’s Court of Appeal confirmed a three-month sentence against Abu Al-Khair imposed after he had been convicted of contempt of the judiciary. According to PEN’s information, he was arrested at the Specialized Criminal Court in Riyadh while he attended the fifth session of his trial for other charges made against him in 2013, which included: “breaking allegiance to and disobeying the ruler and disrespecting the authorities,” “offending the judiciary,” “inciting international organizations against the Kingdom,” and “founding an unlicensed organization” i.e. MHRSA.

Initially held in Al Hair prison, where there were concerns that he may have been subjected to ill-treatment, Abu Al-Khair was transferred on May 27, 2014, to Briman prison in Jeddah. On July 6, 2014, the Specialized Criminal Court  – established in 2008 to try terrorist suspects, but increasingly used to jail rights activists – sentenced him to 15 years in prison, a 15-year ban on travel abroad, and a fine of 200,000 Saudi Riyals (equivalent to approximately US$53,000) on a number of broad and vaguely worded charges that are believed to stem solely from his peaceful activism, including comments to news outlets and on Twitter criticizing Saudi human rights violations. On August 11, 2014 he was moved again to Al-Malaz prison in Riyadh, over 960 kilometers from his family in Jeddah.

According to MHRSA, Abu Al-Khair refused to recognize the legitimacy of the court or to defend himself against the charges. He also refused to sign a copy of the trial judgment or to appeal the conviction or his sentence. MHRSA stated on 12 August 2014 that it believes his prison transfers are a punitive measure for Abu Al-Khair’s refusal to recognize the court.

November 9, 2020: Human Rights Watch calls on G20 leaders to pressure Saudi Arabia to release all those illegally detained, including Waleed Abu Al-Khair by name. The organization launches its #G20SaudiArabia campaign.

January 9, 2020: Al-Khair is transferred to a hospital following a deterioration in his health while on hunger strike over ill treatment in prison.

November 29, 2019: Three days after being moved to solitary confinement and held incommunicado, Al-Khair begins a hunger strike in protest of his ill treatment.

June 7, 2016: Al-Khair requires medical attention and a special diet, given that he suffers from diabetes and intestinal complications; however the prison authorities have refused to give him the care he needs. The authorities refuse his request for medical tests, prevent him from ordering the foods that are best suited for his medical condition, and deprive him of visitations and reading materials. To protest against his continuous mistreatment and the prison authorities’ refusal to provide him with the medical care he needs, Al-Khair begins a hunger strike in the Jeddah prison where he is held.

July 6, 2014: Al-Khair is fined, sentenced to 15 years in prison, five years of which is suspended, along with a 15-year ban on travel abroad following the completion of the sentence.

October 2013: Al-Khair is sentenced to three months in prison on charges including “insulting the judiciary” and “attempting to distort the reputation of the kingdom.”