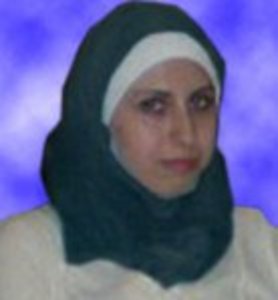 Tal Al-Mallouhi is a Syrian student, poet, and blogger. She was detained on December 27, 2009, after being summoned for questioning about her blog entries. On February 14, 2011, the State Security Court in Damascus convicted Al-Mallouhi of “divulging information to a foreign state,” and sentenced her to five years in prison.

On October 24, 2013, the State Security Court ordered Al-Mallouhi’s release. Despite the expiry of her sentence and the above-mentioned order, she has not been released. She is believed to have been disappeared while detained in Syrian custody.

Tal Al-Mallouhi is a 29-year-old student, blogger, and poet from Homs, Syria. Entries in her blog include poetry and social commentary on issues such as the plight of Palestinians, as well as calls for freedom, peace and tolerance. The homepage of her blog features a picture of Gandhi with the quote “you will remain an example.”

Tal Al-Mallouhi was detained on December 27, 2009, after being summoned by State Security Branch 279 in Damascus for questioning about her blog entries. Two days after her detention, Syrian state security officials raided her family home and confiscated her computer, notebooks, and other personal documents and belongings. Al-Mallouhi was held incommunicado at an undisclosed location without charge or access to her family for nine months, until late August 2010, when her detention was publicized. Al-Mallouhi’s family originally sought her release through diplomatic relations and negotiations and therefore did not want any publicity on the case. However, on September 2, 2010, her mother published an open letter to the Syrian president seeking information on her daughter’s welfare and calling for her immediate release. In the letter, her mother described the intense suffering felt by the entire family at her daughter’s detention without any confirmed cause. Her family was finally allowed to visit her for the first time at Doma Prison in Damascus on September 30, 2010, but has not been permitted to visit her since.

On February 14, 2011, in a closed session, the Damascus State Security Court convicted Tal Al-Mallouhi of “divulging information to a foreign state” and sentenced her to five years in prison. The court did not disclose any evidence or details to justify the verdict, and it is widely believed that she is being targeted for posting poetry and other writings concerning political and social issues on her online blog.

The State Security Court’s verdict was final, and there was no possibility of appeal. Al-Mallouhi has no known political affiliations, and sources close to the family are baffled by the charges. At the time, Al-Mallouhi was reportedly held in solitary confinement in Doma Prison, near Damascus.

On October 19, 2013, Tal Al-Mallouhi’s name was included in a prisoner exchange agreement between the government and armed groups. After a State Security court ruling on October 24, 2013, it was reported that Al-Mallouhi had been released. However, sources note that she was taken from Douma prison to the State Security Department in Damascus in 2016. Last seen transferred to another state location, Al-Mallouhi is believed to have been disappeared in Syrian custody.

Al-Mallouhi suffers from tachycardia (accelerated heart rate) and was reportedly being denied treatment for her condition in detention. There are mounting concerns for her well-being and fears that she may be subjected to various types of torture while detained.