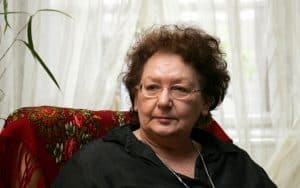 Writer, translator, editor, professor, and activist Svetlana Slapšak faced physical danger as well as legal troubles for her work advocating for human rights peace in her native Serbia. In 1989 she lost her job and became somewhat of a pariah as her friends and colleagues feared the displeasure of the nationalist movement should they support her. She fled to Slovenia in 1991 and continued her activist work there, including organizing the women’s anti-war group Silence Kills: Let Us Speak Up for Peace. In 1993 she received the PEN/Barbara Goldsmith Freedom to Write Award, after which she was able to facilitate her application for Slovenian citizenship. She continues to be an outspoken voice in Serbian politics, participating in anti-government protests and writing articles.

Svetlana Slapšak was born on January 18, 1948, in Belgrade, Serbia. As a student at the University of Beograd in the late 1960s she was once beaten by the police because of her work with the outspoken satirical student magazine Frontisterion. She eventually graduated with an MA and PhD in Classical Studies and Linguistics.

Slapšak has written 70 books, including the popular mock-adventure novel Leon and Leonine. At multiple points between 1968-1988 her passport was denied because of her activism. In the 1980s she defended many opposition activists who were harassed or imprisoned by the authorities, initiated a petition to abolish the death penalty with her husband Bozidar Slapšak, and served as president of the Writers’ Association of Serbia’s Committee for the Freedom of Expression. In the late 1980s Slapšak was brought to court over articles critical of Slobodan Milosevic; though she was acquitted, her staunch belief in the peace movement led to accusations of being a traitor, and she lost her job at the Institute for Arts and Literature in Belgrade as well as the support of her friends and colleagues, who feared reprisal from Milosevic’s powerful nationalist movement.

In the ’80s and ’90s she wrote numerous articles criticizing Serbian nationalism and decrying injustices perpetrated by Serbians. In one series of articles, she protested a law that punished Albanians in Kosovo for raping Serbian women more severely than Serbians who raped Albanians. Facing more and more danger for her unrepentant criticism of the government and the new president, in 1991 she fled to Slovenia, where she organized the women’s anti-war group Silence Kills: Let Us Speak Up for Peace.

In 1993, Svetlana Slapšak was named a recipient of the PEN/Barbara Goldsmith Freedom to Write Award, after which she was able to facilitate her application for Slovenian citizenship. She has since served as a professor, researcher, and dean at many international universities, including the Ljubljana Graduate School of Humanities, Rutgers University in New Jersey, and the EHESS in Paris, as well as continuing her literary career with essays, a novel, contributions to the Belgrade daily Danas, and a feminist magazine, ProFemina, which she founded in Belgrade in 1994.