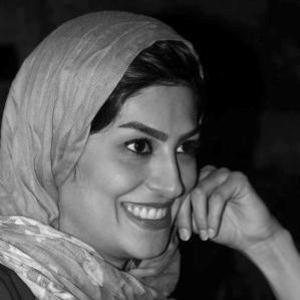 Shiva Nazar Ahari is an Iranian journalist, blogger, human rights activist, and former political prisoner. Her most recent imprisonment was a four-year sentence from September 2012 to 2016. She was convicted on charges of “waging war against god,” “spreading propaganda against the system,” and “gathering and colluding to commit a crime against national security” for her alleged participation in political gatherings in 2009. In October 2018, Ahari relocated to Ljubljana, Slovenia under the International Cities of Refuge Network (ICORN) Program, through which cities offer refuge for writers, journalists, and artists at risk.

Shiva Nazar Ahari is an award-winning human rights activist, blogger, journalist, and founding member of the Committee of Human Rights Reporters. Since 2002, when she was 18, she has been imprisoned on several occasions for her peaceful protesting and reporting on human rights abuses in Iran.  The Committee of Human Rights Reporters (CHRR) reports on and campaigns against a wide range of human rights abuses suffered by the Iranian people. Since 2009, the Iranian government has cracked down on the CHRR and any collaboration with the group is considered a crime. Many of the members of the CHRR worry for their safety and have fled the country, while at least eight members have been arbitrarily arrested since 2009.

Ahari’s most recent case resulting in her four year sentence started on June 14, 2009, when she was arrested following disputed presidential elections and unrest. She was released on bail on October 13, 2009 but rearrested on December 20, 2009 and was held, mostly in solitary confinement, until September 12, 2010 in Evin prison. On September 4, 2010, she was sentenced to 74 lashes and six years in prison, which was later reduced to four years in prison on appeal. Ahari is one of multiple women who has been held in prison in Iran for their writings and activism.

October 2018: Ahari relocates to Ljubljana, Slovenia under the ICORN Program and will pursue her work for change in Iran from a place of refuge for two years.

September 8, 2012: Ahari is arrested alongside another female activist to serve the four-year sentence upheld on January 28, 2011.

September 12, 2010: Ahari is released on bail pending the outcome of her appeal.

December 20, 2009: Ahari is re-arrested with other activists attempting to travel for the funeral of Grand Ayatollah Hossein Ali Montazeri.

October 13, 2009: Ahari is released on bail after being in solitary confinement for more than a month.

During her time in prison after missing father’s day for two consecutive years, Ahari wrote a letter to her father drawing attention to the imprisonment of several thinkers in Iran and urged strength.