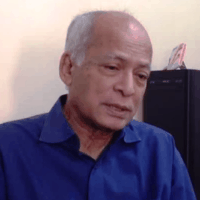 Shamsuzzoha Manik is a Bangladeshi translator, writer, editor, and publisher who was arrested on February 15, 2016 after a religious extremist group warned of violent protests over one of his books. The police shut down Manik’s stall at the Ekushey Book Fair in Dhaka before arresting him at his offices and seizing copies of the offensive title. On October 31, 2016, Manik was released pending trial; he faces up to 14 years in prison

Shamsuzzoha Manik, founder of the now-defunct bangarashtra.net website for secular debate and owner of the publishing firm Ba-dwip Prokashoni, is a translator, publisher, and activist.

January 31, 2017: Manik attends a court hearing was but there are no witnesses present.

October 2016: Manik remains in pre-trial detention from his arrest until October 31, 2016, when he is released on bail. He is reportedly in poor health and under threat by Islamic fundamentalist and militant groups.

February 2016: At the annual Ekushey Boi Mela book fair in February 2016, Shamsuzzoha Manik is arrested for publishing Islam Bitorko (Debate on Islam). Detractors point to a controversial chapter on sex, entitled “Muslim Manosher Jouna Bikriti” (“Sexual perversion of the Muslim mind”), which was deemed harmful to religious sentiments. Two of Manik’s associates are arrested as well: Fakir Taslim Uddin Kajal, the owner of the printing house where the book was printed, and Samsul Alam Chanchal, Manik’s brother and a writer.

The initial complaint about Islam Bitorko and Manik comes from the Islamist fundamentalist group known as Khelefat Andolon (Caliphate Movement), which expressed offense and threatened violent demonstrations at the book fair because of the book. In addition to shutting down Ba-dwip Prokashoni’s stall, police arrest Manik and seize copies of the book, his computer, USB drives and mobile telephone, and several other titles.

Although Islam Bitorko is a printed book, all chapters of the book are also published online; because of this, Manik is charged under Section 57 (2) of the Information and Communication Technology Act, which allows for warrantless arrests and 14-year maximum sentences for online violations including online expression about religion that could be deemed defamatory or offensive. The case has since been transferred to the Cyber Tribunal of Bangladesh in Dhaka.

In the past few years, there has been a serious deterioration in the climate for free expression in Bangladesh. Radical Islamist groups have claimed the killings of at least six bloggers, free thinkers, and their publishers since February 2015, and recently, the attacks have widened to include civil society actors, academics, and religious figures with diverse views. Dozens of other dissenting voices have been driven into hiding or exile. Meanwhile, speech is increasingly constrained by a restrictive legal environment, official attempts to undermine independent media, blocks on social media and other communications applications, and a lack of governmental support for the principle of freedom of expression and an unwillingness to provide police protection to those at risk. PEN’s work on Bangladesh has expanded significantly since February 2015, when Avijit Roy, a Bangladeshi-American secularist writer, was murdered while leaving a book fair in Dhaka. Our advocacy centers on persuading the Bangladeshi government to adequately address and stop attacks on free speech, and on the U.S. government and other international actors to support writers and others under threat.

Open Letter to the Ambassador of Bangladesh to the United States

Open Letter to the Ambassador of Bangladesh to the United States