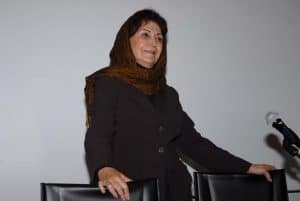 Shahla Lahiji is an Iranian writer, translator, and director of the Roshangaran publication company. She is the first woman to found and run a publication company in Iran. Lahiji was one of 16 Iranian writers and intellectuals put on trial for participating in a conference in Berlin in April 2000. Upon her return to Iran, she was arrested and tried by the Islamic Revolutionary Court for speaking out against the Islamic State’s policies toward women. She was convicted and sentenced to three years and six months in prison on charges of endangering national security and spreading propaganda against the state. Lahiji was released in June 2000 after she posted $60,000 in bail. In 2001 she received the PEN/Barbara Goldsmith Freedom to Write Award, and after her trial in January 2002, her sentence was reduced to six months, which was deemed already served. She continues to work and live in Tehran.

Shahla Lahiji founded Roshangaran, Persian for “enlightened”, in 1983, and has since published hundreds of works, primarily by female writers. Lahiji is a prominent women’s right’s advocate, and in April 2000 she was one of 19 prominent cultural figures invited to participate in a conference at the Heinrich Böll Institute in Berlin. The event brought together Iranian writers and Iranians living in exile to debate political and social reform in Iran. After returning to Iran, the participants and three translators accused of helping to organize the event were detained and charged with endangering national security and other related crimes.

Lahiji was held in Evin Prison and interrogated for several months without access to her attorney, before being released on bail in June 2000. Trial proceedings against the conference participants began in October that year, first behind closed doors, and then, following widespread public protests, in 10 open sessions. The final verdict was returned in January 2002. Of the 19 intellectuals charged in connection with the Berlin conference, six were acquitted and 11 were sentenced to prison terms ranging from 4 to 14 years, though some have since been released, including prominent cleric and writer Hasan Yousefi Eshkevari. Shahla Lahiji had initially received a sentence of three years and six months in prison for acting against national security by participating in the conference, plus an additional six months for propaganda against the Islamic Republic for speaking out about the dangers facing writers in Iran. Her sentence was later reduced to six months.

Lahiji remains committed to publishing works by young, new voices that represent Iran. She remains a staunch supporter of women’s rights and critic of censorship in Iran.