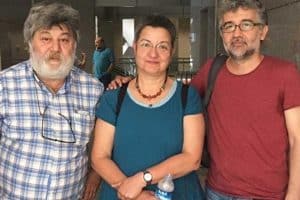 Şebnem Korur Fincancı, Ahmet Nesin, and Erol Önderoğlu are human rights defenders and journalists. On June 20, 2016, they were arrested and questioned about their involvement in a freedom of expression campaign, “Guest Editor-in-Chief Campaign,” which was organized in solidarity with the newspaper Özgür Gündem. On June 30, 2016, Önderoğlu and Financı were conditionally released and Nesin was released the following day but they still faced charges under the Anti-Terror Law and were accused of participation in terrorist propaganda. On December 19, 2018, Fincancı and Önderoğlu were convicted for “disseminating terrorist propaganda” and sentenced to serve two and a half years, and two years and three months respectively. The sentences are not to be enforced during the appeals process. In the 11th hearing of their appeal on July 17, 2019, all three are acquitted of the charges. However, prosecutors soon appealed the acquittal verdict. On November 3, 2020, the 3rd Penal Chamber of the İstanbul Regional Court of Justice announced their decision to overturn the trio’s acquittals on procedural grounds. The trial has since been postponed, keeping the trio in legal limbo for at least a year-and-a-half.

Şebnem Korur Fincancı is the president of the Human Rights Foundation of Turkey, which documents instances of torture and other injustices and helps victims with rehabilitation and legal assistance. Fincancı was also involved in founding the Forensic Doctors’ Association and was a key player in the development of the United Nations’ Istanbul Protocol, a set of guidelines for investigating and documenting torture. In 2014, she received the International Hrant Dink Award for her work exposing torture in multiple countries.

Ahmet Nesin, a writer and journalist, is the son of one of Turkey’s most prolific writers. Nesin is also involved in human rights cases and deals with freedom of speech issues in Turkey within his columns. In his brief political career he applied to be an MP of a left-libertarian party in 1999 but was rejected due to his record. Furthermore, he tried to become an MP from the Peoples’ Democratic party in 2015 but was not elected. Even though he has moved to France after the case has opened, he continues to write for various news outlets.

Erol Önderoğlu is a correspondent of the human rights organization Reporters Without Borders in Turkey. As a French-Turkish journalist, he has mostly focused on freedom of speech issues in Turkey on both countries’ media platforms. For a period, he served as the monitoring editor in chief at Bianet and is still involved at Bianet, a website that gives special attention to human rights issues. In 2018, the Netherlands–based Roosevelt Foundation awarded Önderoğlu with a Freedom of Speech Award.

Özgür Gündem, a newspaper covering Kurdish issues, was shut down by decree as part of the state of emergency in the country following the failed July 15, 2016, coup. The “Guest Editor-in-Chief Campaign” was a solidarity campaign launched after Özgür Gündem was closed. Starting from May 3, 2016 someone would symbolically act as the editor in chief for a day, which lasted until August 7, 2016. Investigations were launched into 50 of the 56 “editors-in-chief” who participated in the campaign, with charges of “propagandizing for a terrorist organization” and for “publishing and spreading statements of terrorist organizations under Articles 7(2) and 6(2) of the Anti-Terror Law No. 3713. In 38 of these cases a lawsuit has been brought whereas for 11, charges have been dropped.

June 14, 2022: A hearing takes place and the trial is adjourned until October 19, 2022 in order to await Nesin’s rogatory letters. Out of the group, only Önderoğlu is present. Bircan was reportedly not at the hearing.

April 25, 2022: Önderoğlu’s lawyers, Fikret Ilkiz and Tora Pekin, appeal to the 14th High Criminal Court to request that the presiding judge be dismissed on the basis of partiality in the trial against Nesin, Önderoğlu, and Fincancı. The presiding judge Murat Bircan is a former candidate of the AKP party with strong ties to Turkish president Recep Tayyip Erdoğan, who he has publicly endorsed.

September 30, 2021: The retrial of Ahmet Nesin, Erol Önderoğlu, and Şebnem Korur Fincancı resumes. Nesin, abroad, did not attend. The court issues a letter rogatory to take Nesin’s statement from where he currently lives in France.

February 3, 2021: 13th High Criminal Court of Istanbul holds the retrial of Fincancı, Önderoğlu, and Nesin in the “Özgür Gündem solidarity case,” charges from which the trio were released in July 2019. Fincancı, Önderoğlu, their lawyers, and the lawyer of Nesin–currently abroad–address the court with statements in opposition to the appellate court’s decision to overturn the trio’s acquittal. Fincancı emphasized the political nature of the reversal, stating that, “This is one of many trials where the rule of law is completely abandoned.” After the hearing, the court issues its interim ruling, complying with the appellate court’s reversal decision.

September 10, 2019: Fincanci, Nesin, and Önderoğlu are notified of the Turkish prosecutors’ decision to appeal the verdict of acquittal.

April 16, 2019: The 10th hearing of the case in which Şebnem Korur Fincancı, Ahmet Nesin, and Erol Önderoğlu are charged with “engaging in propaganda for a terrorist organization,” “incitement to commit a crime,” and “praising criminal activities and those engaged in them” for standing in as guest editors in the “Editors-in-Chief on Watch” solidarity campaign for Özgür Gündem newspaper is held in Istanbul 13th Heavy Penal Court. The court does not reach a verdict and decides to hold the next hearing on July 17, 2019.

January & February, 2019: Two hearings take place during these months, in both of which only Fincanci and Önderoğlu attend as Nesin resides abroad. The court decides to grant time to the defendants and their attorneys.

April & October, 2018: Two hearing take place in which the defendant give their statements and their application to the Constitutional Court against the rejection of his acquittal request is overruled.

June 8, 2017: Erol Önderoğlu and Senem Doğanoğlu take the stand and argue that Article 214 of the Turkish Criminal Code (inciting to crime) is a matter of freedom of expression and is problematic in terms of lawfulness.

November 8, 2016: At their first hearing, on the Istanbul Çağlayan 13th Heavy Penal Court , they are denied a petition to drop the charges. If convicted, they face 2 years to 14 years and six months in prison.

June 20, 2016: Şebnem Korur Fincancı,  Ahmet Nesin, and Erol Önderoğlu are arrested in connection to their participation as one-day editors-in-chief. They are charged with “inciting to commit a crime,” “praising crime and criminality,” and “making propaganda for a terrorist organization,” as Özgür Gündem has been labeled an outlet of propaganda for the Kurdish Worker’s Party (PKK), considered to be a terrorist organization in Turkey.

May 2016: The daily newspaper Özgür Gündem begins its “Editor-in-Chief on Duty” campaign in response to government investigations and harassment. About 50 prominent journalists serve as one-day editors-in-chief as part of the campaign, expressing solidarity with the publication and defense of freedom of the press.

Turkey: Özgür Gündem ‘Editors-in-Chief on Watch’ must be released

Joint Letter: Obama and Trudeau Must Call for Charges Against Turkish Journalists to be Dropped