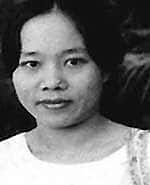 San San Nwe is a journalist, novelist, and political activist. She was sentenced in 1994 to 10 years’ imprisonment for “spreading information injurious to the state” and “giving one-sided views” to foreign reporters. The reason underlying her imprisonment was her active support for Aung San Suu Kyi, who at the time was being held under house arrest by the military government after winning a landslide victory in the 1990 elections. Nwe received the PEN/Barbara Goldsmith Freedom to Write Award in 1995. She was released in 2001 after serving seven years of her sentence.

San San Nwe was born in August 1945 in the town of Tharrawaddy, about 50 miles north of the former capital Yangon. She is the author of Prison of Darkness, a novel, and dozens of other works of fiction and nonfiction. She was a member of Aung San Suu Kyi’s National League for Democracy (NLD) party, which was formed in 1988, and which coincided with the year in which Nwe’s work became banned in Myanmar.

In October 1994, Nwe was sentenced to seven years in prison for “spreading false information” and to three years for “membership or contact with illegal organizations.” Her daughter Myat Mo Mo Tun, who was imprisoned with her, was released in March 2000. San San Nwe was released on July 18, 2001, after serving seven years of her sentence.

We are grateful to @RepCohen and @RepJoeWilson for introducing a resolution in the U.S. House decrying the Belarusian regime and its brutal suppression of the pro-democracy movement over the past year. https://pen.org/press-release/pen-america-welcomes-congressional-resolution-condemning-repression-in-belarus/

Our partners at @FreedomFirst are organizing a vigil this Friday 10/1 to
honor Jamal Khashoggi on the eve of the anniversary of his murder 3
years ago. Join us in remembering all he stood for: http://fal.cn/vigil_tw.