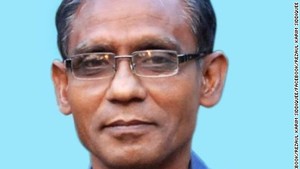 On April 23, 2016, Professor Rezaul Karim Siddique was murdered in an attack similar to the attacks on and murders of targeted writers. Assailants with machetes accosted Siddique, a distinguished English professor at Rajshahi University, as he walked to a bus station in his neighborhood. Although a student had been taken in for questioning, authorities have not yet found Siddique’s killers.

Unlike the secular bloggers who have been targeted in recent years, Siddique was not publicly critical of Islam. The fact that he was murdered in the same manner as the secular bloggers raises concerns that militants have broadened their definition of who qualifies as an “atheist” and will target anyone who participates in non-religious cultural events. Siddique established a music school in the city of Rajshahi in northern Bangladesh, an area well known for its ties to Bangladeshi terrorist group Bangla Bhai and other militants belonging to Jamaat-ul-Mujahideen, an Islamic fundamentalist organization. Siddique played the tanpura, a long-necked string instrument, wrote poems and short stories, and edited a biannual literary magazine called Komol Gandhar.

Though Siddique was not political, his love of music and art and his participation in cultural events most likely led extremists to punish him for “calling to atheism”, as the group said in a statement released after his murder. In an interview with The Guardian, Sajidul Karim Siddique, a brother of the victim, said the academic was a “very quiet and simple man” who focused on studying and teaching.

“So far as we know, he did not have any known enemies and we never found him worried,” he said. “We don’t know why it happened to him.”