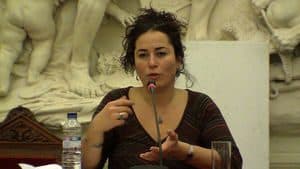 In July 1998, writer, sociologist, and feminist Pınar Selek was arrested in connection with an explosion at the Istanbul Spice Bazaar, a tragedy that led to the deaths of seven people and injuries of over 100 others. Despite the conclusion of multiple experts that the blast was not caused by a bomb but was actually an accident, in the years since her initial arrest, Selek—who now lives in exile in France—has been tried and acquitted four times. The international community suspects she is being pursued through the courts as a means of penalizing her for her legitimate research and commentary, as well as her support for minority groups in Turkey. In January 2017 the Chief Prosecutor of the Supreme Court of Turkey once again requested the reversal of her December 2014 acquittal, and she remained on trial for over five years. On June 22, 2022, the Turkish Supreme Court sentenced Selek to life in prison.

Pınar Selek is a Turkish sociologist, writer, and feminist known for her work on the rights of vulnerable communities in Turkey. She has written extensively about the plight of women, the poor, street children, the LGBT community, the Armenians, and the Kurds in Turkey. She has been published in Turkish, French, and German and is one of the founding editors of the Amargi, a leading Turkish feminist journal published by the Amargi Women’s Solidarity Cooperative.

On July 9, 1998, an explosion at Istanbul’s Spice Bazaar killed seven and wounded over 100 others. Pınar Selek was arrested for the bombing and served 2.5 years in prison, during which she reports having been tortured in an attempt to force her to confess to the charges, though she never succumbed. A team of experts concluded that the explosion was not caused by a bomb, but by the accidental ignition of a gas cylinder, and she was released in December 2000. Despite these findings, the case against Selek continued until a new trial began in December 2005; she was acquitted in June 2006.

In 2007, without any new evidence, the prosecutor appealed her acquittal and demanded an aggravated life sentence. In May 2008, Selek was acquitted for a second time. Facing the reversal of this second acquittal, Selek left Turkey for Berlin in 2009, where she was granted a PEN Writers in Exile scholarship from December 2009 until November 2011, when she moved to Strasbourg, France, to begin a Ph.D. in political science.

In February 2010, the Court of Appeals again objected to her acquittal, and sent the case for review once more. The lower court refused to conduct a review on the grounds that the acquittal was legitimately and fairly given, and upheld the acquittal on February 9, 2011. However, at a November 22, 2012 hearing, the lower court decided to drop its refusal and proceed with reopening the trial against Selek on the grounds that the refusal had been “contrary to procedure.”

The new trial began on December 13, 2012, at the Çağlayan Courts of Justice, with all five suspects in the case being tried in absentia. On January 24, 2013, Pınar Selek was sentenced to life in prison, again despite the lack of evidence. That summer, Turkey issued an international warrant for Selek, which Interpol ignored. On June 11, 2014, Turkey’s Supreme Court of Appeals overturned Selek’s conviction on procedural grounds, but, though the warrant for her arrest was lifted and her standing life sentence was dropped on October 2, 2014, she was put on trial again, this time at the 15th High Criminal Court in Istanbul. On December 19, 2014, she was acquitted of all charges for the fourth time. In its closing statements the court ruled that in the absence of clear evidence the trial against Selek could not continue.

Shortly after this fourth acquittal, the public prosecutor appealed against it, again without any new evidence. On January 25, 2017, the Chief Prosecutor of the Supreme Court demanded the acquittal be reversed, and the case was once again considered. On June 22, 2022, the Turkish Supreme Court sentenced Selek to life in prison, overturning her December 2014 acquittal. She remains based in France.

It is widely believed that the renewed prosecution of Selek is linked to her work as a sociologist researching Kurdish issues in the mid- to late-1990s, and to contact that she established with the banned Kurdistan Workers Party (PKK). The international community suspects she is being pursued through the courts as a means of penalizing her for her legitimate research and commentary, as well as her support for minority groups in Turkey.

The Woman vs. The State: Interview with Pinar Selek

🎫 In-person RSVP in the link

What's so controversial about neighbors helping an old woman make cholent for Shabbat? That's the story of a picture book removed along with 175 other titles from schools in Duval County, Fla. @PENamerica is protesting. I wrote about it for @jdforward https://forward.com/fast-forward/527511/authors-protest-banned-books-list-in-florida-that-includes-shabbat-picture-book/