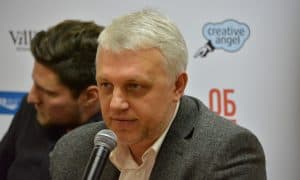 Pavel Sheremet, a Belarusian-born Russian journalist who worked in Belarus and Ukraine, died in a car explosion in Kyiv on July 20, 2016. The Ukraine Prosecutor’s Office said the explosion was caused by a bomb and classified the journalist’s death as a murder, in which investigations are ongoing. Sheremet was a prominent journalist known for criticizing the Belarusian, Russian, and Ukrainian governments, and won numerous international awards for his reporting, including the Belarus PEN Center’s Adamovich Prize (1995), the Committee to Protect Journalists’ International Press Freedom Award (1998), and the Organization for Security and Cooperation in Europe’s Prize for Journalism and Democracy (2002).

During his career, Pavel Sheremet faced retaliation for criticizing the regime of Belarus President Aleksander Lukashenko. He started his career in 1994 as anchor and producer of Prospekt, a Belarusian news program that was banned a year later by Lukashenko. In 1995, Sheremet started working for Belorusskaya Delovaya Gazeta and the Russian public TV company, ORT. That year, he won the Belarus PEN Center’s Adamovich Prize as best television reporter in Belarus. In 1997, he was a signatory and spokesman at the public of launch of Charter 97, a declaration advocating for democracy and an end to dictatorial regime in Belarus. That same year, he was permanently stripped of his journalistic accreditation.

In 1998, Sheremet moved to Russia and became a special correspondent for ORT’s shows Novosti and Vremya, and later became Vremya’s anchor. In 2000, he began working on documentaries and special projects for Russia’s Channel One (former ORT). In 2008, he officially left Channel One after the company criticized him for accusing the Russian government of autocratic tendencies.

In 2010, Sheremet was deprived of his Belarusian citizenship. Since 2011, he worked as anchor on two Russian channels, REN-TV and OTR. In 2012, he founded the website Istoricheskaya Pravda, or Historical Truth, to promote conversation among historians and students of history. In 2014 he resigned from REN-TV and OTR due to disagreements with the channels’ position on events in Ukraine; in particular, he denounced Russia’s annexation of Crimea and its support of separatists in the Donbas.

From 2012 to 2016, Sheremet authored a blog in Ukrayinska Pravda, an independent news outlet in Ukraine, containing his analyses and interviews with prominent Ukrainian political leaders, businessmen, and artists. He was also an anchor of shows on Ukrainian channels TVi, since 2013, and Radio Vesti, since 2015, including Maundy Thursday, in which he exposed the corruption schemes of Ukrainian oligarchs. In addition, in July 2015, Sheremet started his own project, Dialogues, on Ukraine’s Channel 24, in which he had one-on-one conversations with prominent Ukrainian leaders.

Following Sheremet’s murder in July 2016 and in honor of his legacy, the Eastern Partnership Civil Society Forum created the Sheremet Prize for contributions to media freedom. Its first recipient, announced on November 28, 2016, was Mykola Semena, a Ukrainian journalist reporting on Crimea who was previously on trial in Russia on charges of terrorism, but has since been released and cleared of all charges.

August 11, 2020: The Kyiv Court of Appeals rules that one of the suspects in Shemeret’s murder, Yulia Kuzmenko, should be transferred from a detention center to round-the-clock house arrest. In July, the same court eased pretrial restrictions for another suspect, Yana Duhar.

January 30, 2020: Ukrainian Prosecutor-General Ruslan Ryaboshapka extends the pre-trial investigation of Sheremet’s murder until April 2020. According to the prosecutor, there is not yet sufficient evidence to determine the suspects’ culpability.

October 2, 2017: The National Police classify all court decisions in Sheremet’s case since July 24, 2017 for security reasons.

January 20,  2017: Investigations into Sheremet’s murder continue. Despite releasing video of the suspects, interviewing over 500 people, and indexing 140 terabytes of information, police have yet to find Sheremet’s killers six months after his murder.

July 20, 2016: Pavel Sheremet dies in a car explosion in Kyiv. The Ukrainian authorities classify Sheremet’s death as a murder and begin an ongoing investigation into the incident.

Pakistan’s Prevention of Electronic Crimes Act’s defamation clauses have been used to target journalists and rights activists who express dissent against the government and the country’s powerful military. https://bit.ly/37ujZjb

City officials in Jackson, Mississippi are finalizing a plan to give police real-time access to live security video. https://nbcnews.to/33Fyfoi

"The most important thing a writer can do is to live mindfully with curiosity and kindness, to participate in life, and to listen to—and observe—as many people as you can." Read our full #PENTen interview with author @michellegallen: https://bit.ly/3qoorbH.