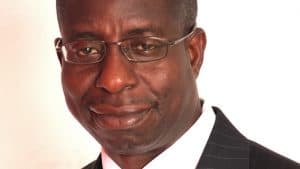 Ogaga Ifowodo is a Nigerian poet. He was arrested in November 1997 after returning from the Commonwealth Summit in Edinburgh, where he and other activists had appealed for stronger sanctions against the dictatorship of then Nigerian President Sani Abacha. He was held in solitary confinement without access to his family, lawyers, or doctors until his release in 1998, which occurred shortly after he received that year’s PEN/Barbara Goldsmith Freedom to Write Award. His arrest was not officially acknowledged by Nigerian authorities, nor were any charges brought against him.

Ogaga Ifowodo was born in 1966 in Oleh, in the Niger Delta. After studying law in Benin and Lagos, he wrote Annual Reports on Human Rights in Nigeria for the Civil Liberties Organization (CLO) in 1992, 1993 and 1994; he also edited the publication Human Rights in Retreat, which chronicled the human rights violations by the military regime of General Ibrahim Babangida, who ruled Nigeria between 1985 and 1993. In 1998 he received the PEN/Barbara Goldsmith Freedom to Write Award, during which time Ifowodo was coordinating the CLO International Campaign for Democracy in Nigeria and contributing regularly to the periodical Liberty.

The recipient of the 1996 Association of Nigerian Authors (ANA) Award for Poetry, Ifowodo is author of three collections of poetry, including Maroko’s Blood and Red Rain. His poems have been published in The Guardian, Granta, AGNI, The Massachusetts Review, and elsewhere. His work has was also anthologized in Voices From the Fringe (1989). Ifowodo is an honorary fellow at the Heinrich Böll Foundation in Germany, and was made an Honorary Member of PEN America and West German PEN. He holds an MFA and a PhD in English from Cornell University, and has since taught poetry and literature at Texas State University, San Marcos. He lives and works in the United States.