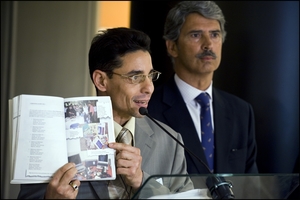 Normando Hernández González was released from prison on July 13, 2010, and taken to Havana Airport where he was reunited with his wife and daughter before boarding an overnight flight to Spain. He arrived in Madrid on the afternoon of July 14, along with one other dissident. His release follows talks between the Cuban government, the Catholic Church, and the Spanish foreign minister, during which Cuba reportedly pledged to release the remaining 52 dissidents who had been jailed during the “Black Spring” of March 2003 and in subsequent months. Hernández now lives in Miami with his family.

Normando Hernández González is a Cuban writer and independent journalist. He was the director of Camagüey College of Independent Journalists.

On March 18, 2003, Normando Hernández González was arrested in his hometown of Camagüey, Cuba, along with 74 other journalists considered to be dissidents by the Cuban government. Thirty-three-year-old Hernández was sentenced to 25 years’ imprisonment under Article 91 of the Cuban Criminal Code for reporting on the conditions of state-run services in Cuba and for criticizing the government’s management of issues such as tourism, agriculture, fishing, and cultural affairs. For several months following his imprisonment, Hernández was kept in solitary confinement and allowed only four hours of sunlight a week, no access to television or radio, and extremely restricted communication with his family. Furthermore, he was given only polluted water and inadequate food, denied the right to practice religion, and offered only the most basic medical services. After engaging in a hunger strike with seven other inmates in protest of the deplorable prison conditions, Hernández was transferred to Kilo 5½ prison in Pinar del Río, over 400 miles from his home and family.

In Pinar del Río, Hernández was denied access to the outside world in any form, and forced to share a small, filthy cell with insects, rodents, and prisoners considered dangerous or mentally unstable. In March 2004, Hernández’s wife, Yaraí Reyes Marín, was granted visitation rights and spent a week traveling across Cuba to see her husband. Upon her arrival, Reyes was stripped and interrogated by prison officials, and ultimately neither she nor her daughter was permitted to see Hernández. While at Pinar del Río, Reyes learned that Hernández had been badly beaten by the Prison Chief of Security, and that his health was rapidly deteriorating- claims which were both denied by prison officials. Between February and May, Hernández was transferred three times to different cells with similarly poor conditions, and uniformly denied access to basic medical treatment.

In December of 2006, he was rushed in critical condition to the Amalia Simoni Provincial Hospital in Camagüey after suffering from fainting spells. During his hospital stay, he experienced nausea, diarrhea, fainting spells, fatigue and fever. Nonetheless, he was kept in a room without a bed, table or chair for an entire week. His food was thrown under the door on a tray and he spent all day sitting on a bucket.

On December 27, 2006, State Security soldiers removed Hernández from the Amalia Simoni Provincial Hospital and took him back to Kilo 7 prison. Doctors claimed that the hospital was lacking in the resources needed to treat Hernández’s delicate condition. Back at Kilo 7 prison, Normando Hernández’s health deteriorated further due to a chronic gastro-intestinal disorder, which causes constant diarrhea, headaches and intermittent fever.

In April 2007, at the urging of Hernández’s mother, Costa Rican legislators granted Hernández a humanitarian visa. In June, Cuban officials refused to honor the visa. On September 10, 2007, Costa Rican legislator Jose Manuel Echandi Meza presented a formal complaint to the UN about Cuba’s denial of an exit permit to Normando Hernández González, claiming that Cuba was violating Normando’s “right to health and freedom.”

On September 14, 2007, Hernández was moved from Kilo 7 Prison in Camagüey to the Carlos J. Finlay Military Hospital in Havana. There, he was diagnosed with several diseases of the digestive system, including lesions in his stomach and tumors in his gallbladder. Hernández had been diagnosed with tuberculosis in early 2007, but it is unclear whether he received treatment for this or not.

On May 7, 2008, without prior notice, Hernández was secretly removed from the Carlos J.Finlay Military Hospital in Havana, where he was receiving essential medical treatments, and returned to Kilo 7 Prison in Camagüey, Cuba. Upon arrival to Kilo 7 prison, he was kept in solitary confinement and in very poor conditions, with inadequate food and medical attention.

On January 8, 2009, Hernández was transferred to Combinado del Este, a Havana prison hospital, after developing an abnormal growth on his Adam’s apple. After spending six weeks in the hospital, Hernández was returned to Kilo 7 on February 25. In a phone interview, Hernández’s wife confirmed that his stay in the hospital left him even more ill than when he arrived. He reportedly received little to no actual treatment during the six weeks and lost five pounds, bringing his total weight to 114 lbs.

In October 2009, Hernández was returned to the hospital at Combinado del Este Prison in Havana suffering from a heart condition known as left ventricular atrophy and polyps on his gallbladder. He was reportedly advised that he should have the polyps removed.