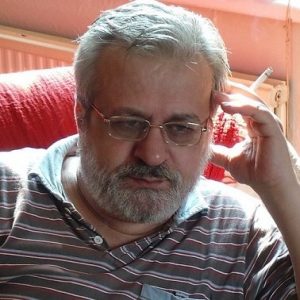 Nizar Nayouf is a Syrian poet, journalist, and human rights activist who was sentenced to 10 years’ imprisonment in 1992 for his membership of the banned Committee for the Defense of Democratic Freedoms and Human Rights (CDF) and for “disseminating false information” via its monthly newsletter Sawt al-Democratiyya (Voice of Democracy), of which he was editor-in-chief. In 1993 Nayouf received the PEN/Barbara Goldsmith Freedom to Write Award. On May 6, 2001, he was released from prison. Today he lives in exile and continues to work as a journalist.

Born in Syria on May 29, 1962, Nizar Nayouf studied political science as an undergraduate at the University of Damascus and earned a master’s degree in economic development. He became a prominent literary figure in Syria, writing three volumes of published poetry, including A Pipe for Smoking Dreams.
Nayouf is perhaps best known for his work as a human rights activist. In addition to working with the editorial staff of the People’s Democratic Party’s official newspaper, he served as chief editor of the party’s news magazine New Jordan. Most significantly, in December 1989, Nayouf helped to found the Committees for the Defense of Democratic Freedoms and Human Rights in Syria (CDF), which at the time was Syria’s only human rights organization. Nayouf served as Secretary-General for the organization, as well as editor-in-chief of CDF’s monthly newsletter, Sawt al-Democratiyya (Voice of Democracy).
In December 1991, Syrian security forces began to round up active members of CDF; Nayouf was arrested in January 1992. In addition, Syrian authorities raided and sealed his house, confiscating all of his writings, books, and personal photographs.  At the time of his arrest, Nayouf was pursuing a doctoral degree in economics from the American University of Beirut.
During February and March 1992, Nizar Nayouf and 17 fellow CDF activists were tried by the Supreme State Security Court. Authorities, apparently threatened by a leaflet Nayouf had drafted entitled “Democracy is Here but the Democrats are Nowhere to be Seen,” charged him with membership in an illegal organization and the distribution of leaflets critical of the government. Judges ignored allegations of pre-trial torture and sentenced Nizar to ten years in prison on March 17.
While in prison, Nizar Nayouf went on numerous hunger strikes to protest his harsh sentence, and reported being placed in solitary confinement and numerous episodes of torture. On May 6, 2001, closely following the Syrian government’s March 29 meeting with the United Nations Committee on Human Rights to discuss adherence to the International Covenant on Civil and Political Rights, to which it is a signatory, Nayouf was released and returned to his family. He was initially held under house arrest, but after international pressure, he was allowed to come to France for medical treatment in July 2001. He was granted political asylum there in 2002, though charges against him remained in Syria and his family reported ongoing harassment.

TWO days left to apply for the Writing as Activism Fellowship: don’t miss this opportunity to join a cohort of NYC-based writer-activists for a six-month immersive workshop experience and produce creative writing pieces centered on activism in our city. https://bit.ly/2ZvShCR