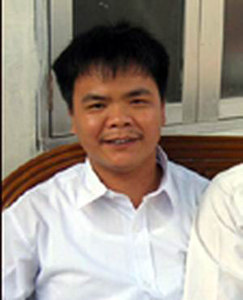 Nguyen Vu Binh was one of 12 bloggers and human rights activists who was stopped, harassed and beaten by plainclothes police officers on January 21, 2015. The group was on their way back to Hanoi from Thai Binh province where they were visiting Tran Anh Kim, a former political prisoner who had just been released earlier that month after serving 5 and a half years in prison. On their way back from their visit, their van was stopped by police officers who demanded that they report to police headquarters immediately. When the group began to question what they had done wrong, the police officers dragged them out of the van and beat them, critically injuring a few. This incident was one of many recent cases of police brutality against bloggers and human rights activists, and reports indicate that the use of wanton physical violence to intimidate political activists in Vietnam is on the rise.

Nguyen Vu Binh is a former journalist who worked for 10 years for Tap Chi Cong (Journal of Communism), the official publication of the Communist Party of Vietnam. In January 2001, he left his post to form the independent Liberal Democratic Party. He has since written several articles calling for political reform and criticizing government policy and is a leading member of the Democracy Club for Vietnam. Nguyen is thought to have been targeted for the online publication of one of his critical essays, “Some Thoughts on the China-Vietnam Border Agreement.”

According to PEN’s information, Nguyen was held incommunicado from September 25, 2002, until the date of his trial. Following a three-hour trial of the Hanoi People’s Court held on December 31, 2003, Nguyen was sentenced to seven years’ imprisonment for his critical writings, to be followed by three years’ house arrest on charges of espionage. Following the proceedings, the official Vietnam news agency reported that Nguyen had been convicted of having “written and exchanged, with various opportunist elements in the country, information and materials that distorted the party and state policies.” He was also accused of communicating with “reactionary” organizations abroad. His sentence was upheld on appeal on May 5, 2004.

Vu Binh was released on June 9, 2007, from Nam Ha Prison under presidential amnesty. Though released from the forced labor camp, Vu Binh remained under a three-year probationary detention and under strict house arrest. PEN welcomed the news but called on the Vietnamese government to release other Vietnamese writers and dissidents who have been imprisoned in violation of their right to freedom of expression as guaranteed by the International Covenant on Civil and Political Rights, to which Vietnam is a signatory.

#BookDefenders: Want to learn how to challenge censorship in your community and elsewhere? Attend our livestream on the 17th at 8pm EST on "How to Effectively Fight Against Book Bans." Featuring speakers from @diversebooks @ncacensorship @PENamerica