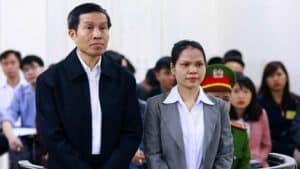 The “Ba Sam” blog has included critical analysis of the Vietnam government as well as other articles such as how to circumvent Vietnam’s firewall in order to read international news. As a result, it has been repeatedly subjected to cyberattacks and other suspected state interference. In September 2012 Nguyen Huu Vinh decided to end his direct involvement with the blog to get out of “the heated atmosphere.” In April 2014 the blog temporarily shut down to mitigate effects of recent hacking.

On May 5, 2014, Nguyen Huu Vinh and his editorial assistant, Nguyen Thi Minh Thuy, were arrested for “untruthful and groundless content” critical of the ruling Communist Party, which allegedly undermined people’s trust in the government. They were charged under Article 258 (2) of the Vietnamese Penal Code for “abusing democratic freedoms to infringe on the interests of the state” by publishing 12 articles on “Dan Quyen” and 12 more on “Chep Su Viet” whose “untruthful and baseless content” served to “distort the lines and policies of the Party and the law of the State; vilify a number of individuals and affect the prestige of offices and organizations; present a one-sided and pessimistic view, causing anxiety and worry; and affect the people’s confidence in the leadership of the Party, the Government, the National Assembly, and the State of the Socialist Republic of Vietnam.”

Article 258 has been used against other bloggers and human rights defenders over the last several years. Those charged under Section 2 fall under the “serious crime” category, which, according to Article 120 of Vietnam’s Criminal Procedure Code, allows authorities to detain suspects for up to six months before trial (and an additional maximum of 90 days post-indictment); Nguyen Huu Vinh and Nguyen Thi Minh Thuy were held for almost two years before going to trial on March 23, 2016.

In court, Nguyen Huu Vinh maintained that he was innocent, and Thi Minh Thuy stated that she did not know who posted the articles in question. They have both denied any relations to the posts from the beginning. After one day of hearings, the People’s Court of Hanoi sentenced Nguyen Huu Vinh to five years in prison. Nguyen Thi Minh Thuy was sentenced to three years. Supporters of the two bloggers protested the trial and several dissidents were arrested.

On May 5, 2017, Nguyen Thi Minh Thy was released from prison after serving a three-year sentence in connection with the articles published on “Ba Sam.” On May 5, 2019, Nguyen Huu Vinh was also released from prison after serving five years in prison on the same charges. Upon his release, Nguyen Huu Vinh told Radio Free Asia that he filled approximately five notebooks with a thousand pages of writing and that he “wrote every day.”