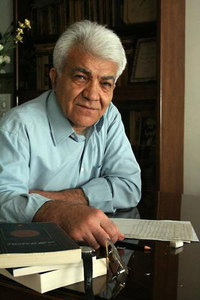 Nasser Zarafshan, a prominent writer and attorney, was released on March 15, 2007, after serving a five-year prison sentence on politically motivated charges. He was arrested and briefly detained on December 2, 2016, along with his son, Mazdak Zarafshan, poet and filmmaker Baktash Abtin, and poet Mohammad Mehdipour. They were freed after several hours. They were arrested while attending a memorial event marking the 18th anniversary of the “Chain Murders,” committed by agents of the Islamic Republic; Zarafshan had originally been arrested for speaking out about and representing the families of the murdered writers and intellectuals. Abtin was reportedly later charged after posting a picture of Mazdak Zarafshan, who had been injured by police during the arrest, on Instagram.

Author, translator, and attorney Dr. Nasser Zarafshan is a member of the Iranian Writers’ Association and a distinguished member of the Iranian Bar Association. His numerous translations and articles have appeared in important periodicals in Iran. He has also acted as the legal representative of two of the families of Iranian writers who were assassinated in November 1998 in what came to be known in Iran as the ‘serial murders’ case. The murdered journalists included Majid Charif, an editorialist with the monthly Iran é Farda, writer-journalists Mohamad Mokhtari and Mohamad Jafar Pouyandeh, and a couple, Darioush and Parvaneh Forouhar, who were freedom of expression activists. It is reported that Zarafshan has been extremely critical of the shortcomings in the official investigation into these murders.

Zarafshan was arrested by members of the Judicial Organization of Armed Forces (JOAF) in October 2000 after giving a speech in the city of Shiraz in which he stated that the intelligence services had murdered five Iranian intellectuals in 1998 in Tehran. He was initially charged with publishing information about the assassinations, imprisoned in December 2000, and was released after a month pending trial. In February 2002 he was tried in a military court behind closed doors with his lawyer present; the presiding judge was a prosecutor with the JOAF. While in detention, Zarafshan’s office was reportedly searched, and weapons and alcohol were allegedly found. He was sentenced on March 19, 2002, to five years’ imprisonment (2 years for disseminating state secrets, 3 for the possession of firearms) and 70 lashes for the possession of alcohol. Zarafshan denies the firearms and alcohol charges and claims these were planted in his office by the authorities.

On April 6, 2002, Zarafshan reportedly told the Iranian Students News Agency that he would appeal against his sentence and request a retrial. However, on July 16, 2002 an appeals court upheld his sentence and Zarafshan was again arrested on August 7 shortly after leaving his home.

The Iranian judiciary did not explain why Zarafshan, a civilian, was brought before the JOAF, the purpose of which is to try members of the armed forces and Revolutionary Guards for violations of the military code. It is reported that the Chair of the Iranian Parliamentary Committee for Human Rights protested the use of a military court in these circumstances, branding it “unconstitutional.”

During his imprisonment, Zarafshan was not only denied medical care for an urgent kidney disease, but also was held in a cell with prisoners sentenced for violent crimes. On June 7, 2005, Zarafshan started a hunger strike to protest the absence of medical treatment. After a significant deterioration in his health, he ended his hunger strike and was hospitalized for an operation on his kidney in July 2005.