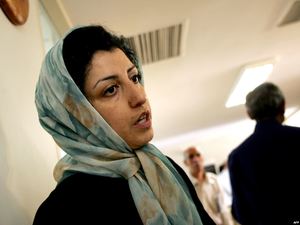 Narges Mohammadi is an independent journalist and the former vice-president and spokesperson of the Defenders of Human Rights Center (DHRC), which advocates for human rights reform and represents political prisoners and prisoners of conscience in legal proceedings. She is also involved in campaigning against the death penalty in Iran. Mohammadi was sentenced to ten years in prison on the charge of “forming an illegal group.” She was released early, on the morning of October 8, 2020.

Mohammadi has long suffered from persecution at the hands of the Iranian authorities; she has been banned from traveling abroad since 2009, when the authorities confiscated her passport. The following year, Mohammadi was arrested from her home without a warrant and held in connection with her work with the Defenders of Human Rights Center. Immediately following her release on bail on 1 July 2010, Mohammadi moved to France with her husband, Taghi Rahmani.

After making a speech in 2014 criticizing Evin Prison’s horrific treatment of prisoners went viral on social media networks, Mohammadi was summoned by Evin Prison later that year and then arrested and sentenced to 16 years in May 2015 on the basis of new charges: five years in prison for ‘gathering and colluding with intent to harm national security’, one year in prison for ‘spreading propaganda against the system’ and 10 years for ‘founding and running an illegal organization’ for her work with Legam, advocating against the death penalty. The sentence handed down to the Iranian journalist was upheld by an appeals court in September 2016. According to reports, Mohammadi now faces an additional charge of ‘insulting officers while being transferred to a hospital’ after she filed a complaint with regards to the treatment she experienced at the hands of prison guards when she was transferred to hospital for examinations.

In 2019, Mohammadi continued to suffer from lack of adequate medical care for her necessary treatment for a gall-baller operation, pulmonary embolism, and repeated seizures. She declared a three-day hunger strike in response. In December 2019, Mohammadi coordinated with other female inmates to again hunger strike in protest of the violence with which Iranian state forces met protestors in mid-November. Days after she was forcibly and violently exiled to a prison in Zanjan, a city 211 miles northwest of Tehran. A statement from Evin Prison denies claims that Mohammadi was beaten.

On July 13, 2020, Mohammadi penned a letter from Zanjan prison, writing that she and 11 other individuals detained in close quarters have been denied basic medical care despite suffering from symptoms of COVID-19. Days later, a news bulletin from state-run Islamic Republic of Iran Broadcasting released a video allegedly showing Mohammadi receiving medical attention in the Zanjan Prison clinic. Mohammadi later revealed in a diary entry that the broadcasted video had been heavily edited to remove footage of her coughing and the full extent of her exchange with the warden. She also said that she was also given an injection and intravenous drip in preparation to stand on her feet. In early August, Mohammadi’s husband, Taghi Rahmani, announced from Paris that his wife appears to have recovered from the COVID-19 symptoms she was suffering in July.

On September 18, 2020, Mohammadi penned another letter from Zanjan prison that called upon “all freedom fighters in the world for help” in the fight against the death penalty, detailing the violent repression of protesters. Published on September 21, 2020 by the Defenders of Human Rights Center, the letter references the Iranian authorities’ leverage of the death penalty against protesters in the streets and in prisons.

On October 8, 2020, Mohammadi was released after enduring eight and a half years of her ten-year prison sentence on the charge of “forming an illegal group.” Her release reportedly came as a result of a law that “allows a prison sentence to be commutated if the related court agrees.” Mohammadi had previously requested temporary release for medical treatment in June 2020, which had been denied.

PEN International first began working on her case in 2011 when a Tehran court convicted her of ‘acting against the national security’, ‘membership of the DHRC’ and ‘propaganda against the regime’ for her reporting on human rights violations, cooperation with Nobel Laureate Shirin Ebadi and visiting political prisoners (see RAN 20/12 and updates). She was sentenced to serve a cumulative sentence of 11 years in prison. The sentence was reduced to six years on appeal in January 2012.

On 21 April 2012, Mohammadi was summoned to Evin prison to serve her sentence. She was released on bail on 30 July 2012 following the severe deterioration of her health.

In May 2015, Mohammadi was arrested days after a fresh trial began on charges including ‘spreading propaganda against the system,’ ‘gathering and colluding to commit crimes against national security’ and ‘membership of an illegal organisation whose aim is to harm national security’ (Legam – Step by Step to Stop the Death Penalty, an organisation that campaigned against the death penalty in Iran) which had been brought against her in June 2014. At the time of her arrest, intelligence officials are reported to have said that she was being arrested to continue serving her six-year sentence. Her trial was subject to several postponements without any explanation provided by the court.

Mohammadi stood trial on 20 April 2016. According to the Defenders of Human Rights Center, the verdict was communicated to her lawyer on 17 May 2016. Mohammadi was sentenced to five years in prison for ‘gathering and colluding with intent to harm national security’, one year in prison for ‘spreading propaganda against the system’ and 10 years for ‘establishing and running an illegal organisation’ for her work advocating against the death penalty. Under legislation adopted in 2015, a person sentenced to several jail terms is required to serve that with the most severe penalty – in this case, 10 years, which will be added to her previous six-year sentence.

Evidence used against Mohammadi included media interviews she had conducted, her connections to human rights defenders, as well as her activities against the death penalty, including her work with the campaigning group, Step by Step to Stop the Death Penalty. It also included her meeting with EU High Representative for Foreign Affairs & Security Policy Catherin Ashton in March 2014.

On 19 September 2016, Mohammadi attended Branch 36 of Tehran’s Appeal’s Court in order to present evidence against the preliminary sentence; however, she was informed that the court had already reached its verdict, according to the International Campaign for Human Rights in Iran.

Before her arrest, Mohammadi told the International Campaign for Human Rights in Iran: ‘I have been ‘charged’ with every single civil activity I have engaged in since my release from Zanjan Prison in August 2012, such as participating in gatherings on women’s rights, air pollution, and [Rouhani’s] Citizenship Rights Charter. I was also accused of honoring families of political prisoners at meetings, or attending a gathering with Gonabadi Dervishes in front of the Prosecutor’s Office, or giving interviews to media outside Iran. I told them there that when you fit all my civil activities into these two charges, it means that I must remain silent and still.’

Mohammadi suffers from a neurological disorder that can result in seizures, temporary partial paralysis, and pulmonary embolism – a blood clot in her lung. Serious concerns for Mohammadi’s health persist following reports that she suffered several seizures in August and October 2015. According to reports, Mohammadi was taken to hospital on each occasion and on at least one instance she was returned to prison against medical advice. In a subsequent incident she was handcuffed to the bed for the first few days of her hospital stay. According to reports, Mohammadi now faces an additional charge of ‘insulting officers while being transferred to a hospital’ after she filed a complaint with regards to the treatment she experienced at the hands of prison guards when she was transferred to hospital for examinations.

In January 2019, Mohammadi declared a three-day hunger strike in protest of the lack of adequate medical care she received. According to a UN statement, Mohammadi required follow-up treatment for a gall-bladder operation and suffered from a pulmonary embolism, related blood clots, bleeding, and repeated seizures. In December 2019, Mohammadi again declared a hunger strike, joining other female inmates to protest the violence with which Iranian state forces met protestors in mid-November. Within the next few days, she was lured to the office of Gholamreza Ziayi, warden of Evin Prison, supposedly to meet with her attorney. Mohammadi was instead informed of her imminent exile to a prison in Zanjan, a city 211 miles northwest of Tehran, “with shocking and extreme violence.” The statement from Evin Prison denies claims that Mohammadi was beaten.

Mohammadi is the mother of nine-year-old twins (born in November 2006), and is the wife of prominent journalist and activist Taghi Rahmani, who has spent a total of 17 years in prison. Taghi Rahmani left the country in May 2011 following escalating pressure from the authorities. Their children joined him in July 2015. She is an honorary member of Danish PEN and Belgian PEN. In May 2016, she wrote a moving letter to the PEN community, calling on the PEN membership to take a stand against the use of solitary confinement as a means of torture. In February 2020, in protest of the current regime, Mohammadi pleaded from jail to the public to boycott upcoming parliamentary elections in Iran.

In September 2008, Narges Mohammadi was elected as President of the Executive Committee of the National Council of Peace in Iran, a broad coalition against war and for the promotion of human rights. She has campaigned for the abolition of the death penalty in Iran, and is the recipient of both the Alexander Langer Award (2009) and the Per Anger Prize (2011) for her human rights work. She was one of awardees of the 2013 PEN/Oxfam Novib Free Expression Award.

Iran: Journalist to Serve Up to 10 More Years in Prison

Iran: Journalist Narges Mohammadi due to stand trial on April 20

Serious Concerns for the Health and Safety of Nargess Mohammadi

Kicking off our disinformation defense training for faith leaders with @RevJJackson @RPCoalition in just a few moments #Elections2020 https://pen.org/event/faith-forward/