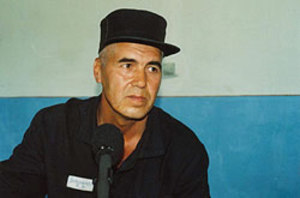 Following 18 years of incarceration and serious threats to his health, prominent Uzbek journalist Muhammad Bekjanov was released in February 2017, subject to a one year travel ban. Originally convicted to 15 years in prison, a few days before his scheduled release in 2012 his sentence was extended by five years for “violating prison rules.” According to reports, things such as “incorrectly peeling carrots” or “failure to keep one’s slippers in the proper place” can be considered “violations” of prison rules. Bekjanov’s release came after president Shavkat Mirziyoyev took office following the death of former president Islam Karimov in August 2016 and pledged to reform the criminal justice system. Bekjanov was held with his colleague, Yusuf Ruzimuradov, in the Bukhara region at Kagan prison, one of the worst in Uzbekistan. Ruzimuradov remains incarcerated.

A prominent Uzbek journalist in the period immediately following the collapse of the Soviet Union, Muhammad Bekjanov came to be recognized as a leading voice in the struggle for democracy in Uzbekistan. When the party of Islam Karimov came to power in 1991, Bekjanov worked side-by-side with his brother Muhammad Salih on the publication of Erk (Freedom), the newspaper of Uzbekistan’s major opposition party.

For three years, Erk served as the primary forum of written dissent against the government of President Karimov, who had been First Secretary of the Communist Party in Uzbekistan in the 1980s. While Karimov’s policies aimed to limit democratic development and silence criticism by hounding journalists and their families, Bekjanov continued to contribute regularly to Erk and supported the Erk party, a political movement founded by Salih during the 1991 presidential election. President Karimov worked consistently to stifle the voice of the opposition, and his government’s efforts led to the banning of the newspaper Erk in 1994.

Bekjanov was forced to flee to the Ukraine and to sever ties with the Erk party and its publications. Erk continued as an underground opposition movement through the 1990s. In 1999, a series of explosions in the Uzbek capital Tashkent was blamed on Erk, and President Karimov ordered all members associated with the opposition to be arrested. Bekjanov was arrested in Kiev on March 15, 1999, and extradited to Uzbekistan. It is suspected that Bekjanov’s arrest resulted from his position as a former Erk journalist.

At his trial five months later, Bekjanov’s testimony included descriptions of torture police used during interrogation to force him to incriminate himself. After a speedy trial, he was convicted of conspiracy related to the Tashkent bombings and was sentenced to 15 years in prison. It is believed that the bombing was used as a pretext to arrest those associated with the Erk party.

On June 18, 2003, Bekjanov gave his first interview since his detention to representatives from the Institute for War and Peace Reporting (IWPR), who were allowed to visit him in a prison hospital in Tashkent. Bekjanov said that he had contracted tuberculosis, a disease that has become endemic in Uzbek prisons. Due to torture, he is now deaf in his right ear and one of his legs is confirmed broken. Bekjanov’s wife was allowed to visit him in prison in October 2006 and reported that he was still subject to beatings and torture that, among other things, caused him to lose most of his teeth.

Further evidence of Bekjanov’s innocence came to light in December 2003 when Zayniddin Asqarov, a political leader in the Islamic Movement of Uzbekistan (IMU) and the lead witness in the prosecution of Bekjanov, told a press conference that he had given evidence after torture. Uzbek authorities responded by reducing the 50-year-old journalist’s sentence to 13 years.

PEN assesses that Muhammad Bekjanov was detained solely for exercising his right to free expression as guaranteed by Articles 19 and 22 of the United Nations Universal Declaration of Human Rights, and is calling for his freedom to travel and join his family in the United States.