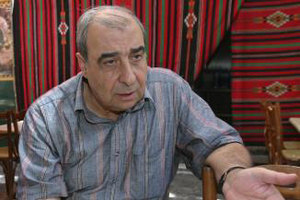 Michel Kilo was released from custody on May 19, 2009, upon completion of his three-year sentence. According to press reports, he was released from ‘Adra Prison in Damascus on May 14, 2009, at midnight. He was held for interrogation at the Intelligence Services headquarters in Damascus until May 19, then allowed to return home. On April 19, 2021, Kilo passed away from COVID-19 at age 81.

Prominent writer and journalist Michel Kilo contributes to the leading Lebanese daily Al-Nahar and the London-based daily Al-Quds Al-Arabi. Initially, Kilo was arrested on May 14, 2006, when he reportedly signed the “Beirut-Damascus Declaration” of May 12, 2006, which calls for the establishment of diplomatic relations between Lebanon and Syria based on respect for each country’s sovereignty. The document was signed by several hundred Syrian and Lebanese nationals. These arrests appear to be part of a renewed crackdown in recent months on government opponents engaged in peaceful opposition activities.

According to PEN’s information, Kilo was arrested on May 14, 2006. He was issued a provisional release order by a judge on October 19, 2006, but his release was obstructed by new charges filed by the prosecution on October 23, 2006. The new charges included “broadcasting abroad false or exaggerated news” deemed “damaging to the reputation of the state or its financial standing,” writing “a letter or article intended to incite racial, religious” or “sectarian conflicts,” and “insulting the President, government officials or public servants.” These charges appear to be unfounded and based solely on his pro-reform activities. On March 6, 2007, a military prosecutor in Damascus charged Kilo with “inciting fellow inmates in ‘Adra prison to sign the “Beirut-Damascus, Damascus-Beirut” joint statement.”

On May 13, 2007, a three-year prison sentence was handed down to Michel Kilo by the Damascus Criminal Court on charges of “spreading false news, weakening national feeling and inciting sectarian sentiments.”

Michel Kilo was detained at ‘Adra prison near Damascus, where he was said to be treated well and granted full access to his family. Since his arrest, Kilo had submitted several requests for his provisional release but all were refused. In August 2008, a Damascus criminal court refused to free Kilo although he had served three-quarters of his sentence and therefore qualified for early release under Syrian law. This decision was quashed on November 2 by an appeal court judge, but Kilo remained in prison until May 19, 2009.