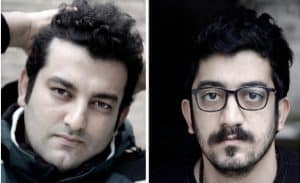 Iranian musician Mehdi Rajabian and his brother, writer and filmmaker Hossein Rajabian, are currently serving three-year prison sentences on charges of “insulting Islamic sanctities,” “propaganda against the state,” and “illegal audio-visual activities.” The two brothers and their friend, Yousef Emadi, were arrested in October 2013 in connection with Barg Music, an underground music-sharing website that the three co-founded. They began serving their sentences on June 5, 2016. On June 22, 2017, they were temporarily released on bail pending review of their final appeal.

On August 11, 2020, Mehdi Rajabian was arrested and briefly detained on a new charge in connection with his latest project Middle Eastern. Mehdi’s court summons required him to appear at the prosecutor’s office for questioning on charges of publishing video clips of women singing and dancing. At the prosector’s office, Mehdi was arrested, brought before a judge, and held in pre-trial detention. Released on bail several hours later, Mehdi currently awaits confirmation of his follow-up trial date.

Mehdi and Hossein Rajabian are accomplished Iranian artists. Mehdi’s most recent album—for which he served as musician, composer, and producer—is entitled History of Iran Narrated by Setar, and Hossein’s first feature film The Upside-down Triangle, a commentary on the Iranian laws governing women’s right to divorce, was completed in 2013. Along with their friend, Yousef Emadi, the Rajabian brothers co-founded the underground music-sharing website Barg Music.

The three were arrested by the Iranian Revolutionary Guard in October 2013 and charged with distributing unlicensed music, much of which was considered “offensive,” through Barg Music. At the time, Hossein was already facing criticism over his controversial film The Upside-down Triangle, which was in production. According to Amnesty International, the three were held for 18 days at an unknown location, where they endured beatings and electric shocks before being transferred to Evin Prison, northwest of Tehran. Interrogations continued there and the three were forced to confess. During this time, Hossein began to experience seizures.

The Rajabian brothers and Emadi were released after two months in solitary confinement. More than a year later, in May 2015, they were summoned before the 21st branch of the Revolutionary Court. Despite pleading that their forced confessions were made under duress, all three were found guilty of “insulting Islamic sanctities,” “propaganda against the state,” and “illegal audio-visual activities,” among other charges. The three did not have access to a lawyer during their interrogations or the trial, which lasted only minutes. On June 5, 2016, the Rajabian brothers began serving their sentences at Evin Prison.

Mehdi suffers from multiple medical conditions that require specialized care and medication. Before his detention, he was diagnosed with suspected multiple sclerosis (MS) and recommended medication and further diagnostic tests. Hossein is suffering from kidney problems and worsening seizures.

August 11, 2020: Mehdi Rajabian returns to the prosecutor’s office for questioning, in compliance with his court summons. Authorities reportedly arrest Mehdi and bring him before a judge. Mehdi is detained for several hours until his family posts bail, and he is released from pre-trial detention. He currently awaits confirmation of a follow-up trial date.

August 10, 2020: Mehdi Rajabian receives a summons from the Cyber Affairs Department of the Revolutionary Courts in connection with a video he released from his latest project, Middle Eastern. He is charged with publishing video clips of women singing and dancing.

March 15, 2019: Mehdi Rajabian releases Middle Eastern, an album recorded in secrecy while on probation. It features contributions from almost 100 artists in 12 countries, many of whom faced similar forms of persecution.

June 22, 2017: The brothers were temporarily released on bail pending review of their final appeal.

June 1, 2017: Freemuse and the Center for Human Rights in Iran called for their release in a public letter to the newly re-elected Iranian President Hassan Rouhani.

April 6, 2017: They returned to prison to continue serving out their sentences.

March 2017: The brothers’ health issues continued, and another medical furlough was granted.

October 28, 2016: The brothers started another joint hunger strike, which ended one month later when Mehdi was granted temporary medical leave due to severe malnourishment and other health issues connected with the hunger strike. Hossein was denied medical assistance at that time.

September 8, 2016: Mehdi and Hossein began their first hunger strike to protest the prison’s refusal to give them adequate medical care, as well as its decision to separate the two brothers. According to the Center for Human Rights in Iran, Mehdi had been transferred to the non-political prisoner’s ward, where he faced beatings and harassment from fellow inmates.

June 5, 2016: The Rajabian brothers began serving their sentences at Evin Prison. Emadi has yet to be imprisoned. Mehdi suffers from multiple medical conditions that require specialized care and medication. Before his detention, he was diagnosed with suspected multiple sclerosis (MS) and recommended medication and further diagnostic tests. But for the first two months of his detention, Mehdi was denied proper medical treatment for his condition and was barred from taking temporary medical leave, causing his health to deteriorate. Hossein is suffering from kidney problems and worsening seizures.

February 2016: The case went before an appeals court, and again the three were denied the right to legal representation. The court upheld the fine but commuted their sentence to three years in prison and a three-year suspended sentence.

October 2013: Mehdi, Hossein, and Yousef were arrested by the Iranian Revolutionary Guard and charged with distributing unlicensed music, much of which was considered “offensive,” through Barg Music.

Iran is among the world’s worst free expression offenders. Hundreds of journalists are currently imprisoned on politically-motivated charges in Iran alongside scores of other writers, bloggers, artists, human rights defenders, and other political prisoners. President Hassan Rouhani pledged to initiate liberal reforms and to improve Iran’s free speech record during his election campaign, but has thus far failed to deliver positive results. Iran remains notorious for a judicial system completely lacking in transparency, which is guilty of numerous arbitrary arrests and one of the world’s highest rates of capital punishment. Human rights organizations report that political prisoners are often kept in solitary confinement, restricted from connecting with their families for long periods of time.

In their own words

“We call on all musicians around the world to condemn these abuses with a worthy response. Do not forget us in these suffocating times… There’s no greater suffering than to be forgotten.”
— Mehdi and Hossein Rajabian in an open letter sent from prison

To learn more about Mehdi and Hossein, click here.

Nervous about divisive conversations around the (virtual) dinner table this holiday season? Redirect that energy into serving as an empathetic resource for credible information - we'll explore how TOMORROW at 3:00PM ET! Register: https://bit.ly/32VpeqF.

Did you catch Tough Questions on #thePENpod with PEN America CEO @SuzanneNossel? We spoke with Suzanne about Saudi Arabia's egregious human rights record, as well as the possibility of a Trump memoir. LISTEN 🎧 : https://bit.ly/37e6unN.

Join writers and readers across America for our first-ever virtual #PENgala on December 8. With special guests, honorees, and a free Audible credit for every registrant, you won't want to miss this celebratory night! RSVP: https://bit.ly/3kHBtxc