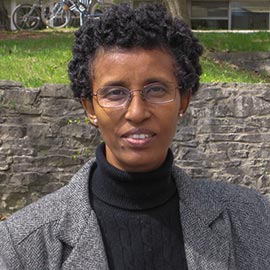 Martha Kumsa, a writer and journalist, was arrested in 1980 at the newspaper offices where she worked in her home country of Ethiopia after writing an article calling for ethnic-Oromo women to defy current power systems and reclaim their cultural heritage. She was imprisoned without charge and tortured. Despite these harsh conditions, she was able to teach in a prison school established by inmates. She was released in September 1989 after receiving that year’s PEN/Barbara Goldsmith Freedom to Write Award. PEN America and other organizations also campaigned for her freedom. Faced with forced military conscription upon her release, she moved to Canada, where she currently resides.

Martha Kuwee Kumsa was born in Dembi Dollo, Ethiopia. As the Ethiopian revolution in 1974 caused the closure of all universities before she could finish her studies, Kumsa trained as a journalist at the Lutheran World Federation in the capital Addis Ababa.

The revolution led to the establishment of a communist dictatorship under Col. Mengistu Haile Mariam. During this time, those deemed to be enemies of the state were arrested, tortured, and executed. Among them were hundreds of Oromos, Ethiopia’s largest ethnic group, and the one to which Martha and her family belonged. Martha’s husband, Leenco Lata, who was one of the founders of the rebel Oromo Liberation Movement. He was arrested and tortured on four separate occasions, after which he fled the country.

Martha was freed in 1989 as part of a general amnesty. Her release came only a few months after receiving the PEN/Barbara Goldsmith Freedom to Write Award, though her name was kept secret at the time, in order to protect her from being targeted by the government. Upon her release she was forced into joining the military, where she feared she would be further mistreated or perish while fighting the rebel militias that would soon seize power and depose Mengistu. She was able to escape to Kenya by hiding in bushes during the day and traveling by night. From there, she applied for and received asylum in Canada, where she is currently a professor of Social Work at Wilfrid Laurier University.

Reading from The Taxi Project by Martha Kuwee Kumsa