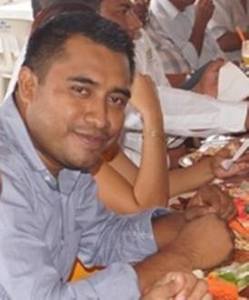 Journalist Marcos Hernández Bautista was shot in the head on the night of January 21, 2016, as he climbed into his car outside a bar in the Mexican state of Oaxaca. In his journalism, Hernández covered sensitive topics in stories about local strongmen who rule parts of the region known as cacicazgos, and social issues including poverty, education, and politics.

UPDATE: On March 3, 2017, former police commander Jorge Armando Santiago Martínez was convicted of the murder and sentenced to 30 years in prison. It is widely considered that the mastermind remains at large.

Marcos Hernández Bautista was a 38-year-old reporter for the daily Noticias, Voz e Imagen de Oaxaca and a freelance correspondent at La Ke Buena radio and a community station in Santiago Jamiltepec, Oaxaca. Hernández was also involved in local politics as a public official with the local government, and supported the Movimiento de Regeneración Nacional (MORENA), a left-wing political opposition party. The editorial director at Noticias, Voz e Imagen de Oaxaca said that Hernández often feared reprisal for the sensitive stories he reported on, specifically on the topic of cacicazgos in Oaxaca. Another colleague of Hernández’s stated that Hernández had not spoken of any threats against him but was afraid because of the sensitive topics he was covering.

On January 21, 2016, as he got into his car outside a bar, Hernández was shot in the head with a 9mm pistol in the Oaxaca municipality of San Andrés Huaxpaltepec. After Hernández’s murder, the Oaxaca state prosecutor Héctor Joaquín Carrillo told Agence France Press that no motive had yet been determined for the killing. On February 25, 2016, local authorities arrested and charged Jorge Armando Santiago Martínez, a local police commander in Santiago Jamiltepec, with Hernández’s murder, but no motive was confirmed. The head of the state prosecutor’s office identified a second man allegedly involved with the murder, who had already been in custody for several days for the murder of a woman.

During the weekend of Hernández’s murder on January 22, 2016, a host at a community radio station, Reynel Martínez Cerqueda, was also killed in Oaxaca, and three journalists were found murdered in Oaxaca in 2015.