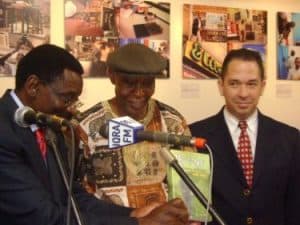 Maina wa Kinyatti is a Kenyan writer and historian. He was arrested in 1982 and sentenced to six and a half years in Kamiti prison for possessing seditious literature. At the time, he was a prominent university researcher known for having Marxist views and being critical of the government of then president Daniel arap Moi, who ran an authoritarian regime. Kinyatti’s trial was largely shambolic, with the presiding judge linking Kinyatti to an attempted coup by Kenya’s air force despite no evidence. Kinyatti received the PEN/Barbara Goldsmith Freedom to Write Award in 1988, and was released in October that same year after serving his full sentence.

Maina wa Kinyatti was arrested in 1982 for possessing a document entitled “Moi’s divisive tactics exposed,” which the government of President Daniel arap Moi deemed to be seditious because it was critical of the government, though it did not advocate violence. After a show trial, in which the presiding judge accepted the police’s word that the document had been found in Kinyatti’s house despite contradictory reports, he was sentenced to six and a half years in prison. During this time, he was severely mistreated, including through beatings, solitary confinement, and being fed half-cooked food. His health deteriorated, causing his vision to be impaired due to growths on his eyes.

After he was released in 1988, he received word that the government was planning to arrest him again, so he fled to Tanzania, from where he applied for asylum in the United States. He has since taught ethnic studies at Hunter College in New York City.