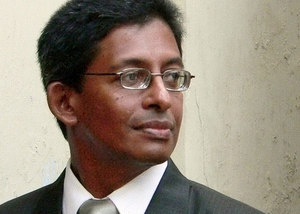 On August 31, 2009, a High Court in Sri Lanka sentenced Tissainayagam to 20 years’ imprisonment with hard labor under the Prevention of Terrorism Act (PTA) for “causing communal disharmony” with articles published in 2006 in North-Eastern Monthly, and also for raising funds to publish the magazine. It is widely believed that Tissainayagam was targeted for his reporting and analysis on the ongoing conflict between government forces and the Liberation Tigers of Tamil Eelam (LTTE) in the northern part of the country. He was convicted with statements collected while in police custody and allegedly forced under torture. There were concerns for his health and safety while he was in prison, as he required surgery for a detached retina and was reportedly denied full access to the medical care he needed.

Detained since March 2008, Tissainayagam was released from detention on bail pending appeal on January 11, 2010. Amid widespread international outcry, President Mahinda Rajapaksa pardoned Tissainayagam on May 3, 2010, intended to coincide with World Press Freedom Day.

J. S. Tissainayagam is a Tamil journalist for the Sunday Times whose articles have also been published in the magazine North-Eastern Monthly. He was also editor of the news website Outreach Sri Lanka.

On March 19, 2008, Tissainayagam filed a complaint before the Supreme Court, claiming that since his arrest he had been tortured, suffered discrimination because of his ethnicity and denied equal protection under the law. On November 17, 2008, he was suddenly moved from a remand prison to the notorious Magazine Prison in Colombo, which is known for violence against Tamil prisoners. Reports indicate that Tissainayagam did not receive adequate medical care though he suffered from tuberculosis and acute infected scabies, both of which he contracted while in detention.