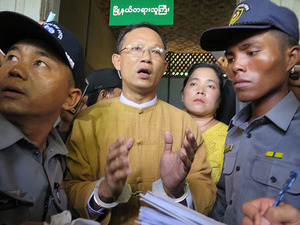 Htin Lin Oo, a former information officer for the National League for Democracy, was sentenced to two years in prison with hard labor in June 2015. Htin Lin Oo was found guilty of “insulting religion” for a speech he gave promoting religious tolerance and criticizing the misuse of religion to incite religious hatred and discrimination in Myanmar. He was released on April 16, 2016, along with 82 other political prisoners, as part of a pardon signed by new president Htin Kway.

In October, 2014, Htin Lin Oo gave a speech during which he criticized some groups for using religion to stoke discrimination and hatred. A 10-minute edited version of the speech circulated on social media soon after, causing outrage among Buddhist nationalist groups that led to his subsequent arrest. Htin Lin Oo was arrested on December 4, 2014 in Chang U-Township after a complaint was filed against him by Township officials. He was charged with “insulting religion” and “wounding religious feelings” under Section 295(a) and Section 298, respectively, of Myanmar’s Penal Code. He was detained during his first court hearing on December 17, 2004 after a bail request at that hearing and all further hearings were rejected. He spent almost six months in custody before the verdict was reached on June 2, 2015. Htin Lin Oo was acquitted of the charge of “wounding religious feelings” but found guilty of the charge of “insulting religion.”  He was released on April 16, 2016 along with 82 other political prisoners as part of a pardon signed by new president Htin Kway. His release comes just weeks after the country’s first non-military government came to power after almost five decades. Htin Lin Oo’s case was featured in PEN’s 2015 report Unfinished Freedom: A Blueprint for the Future of Free Expression in Myanmar.