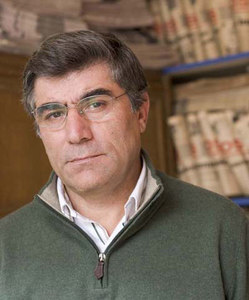 On January 19, 2007, Hrant Dink was shot three times in the head on his way back from a bank in Istanbul, and died instantly. A few days later the assassin was captured and identified as Ogün Samast, an ultra-nationalist whose associates were guilty of bombing a McDonald’s in 2004. At the time, Dink was being prosecuted under Article 301 of the Turkish Penal Code for “denigrating Turkishness,” after referring to the 1915 massacre of Armenians as a “genocide” during a July 14 interview with Reuters. He had also been receiving constant death threats for trying to reconcile Turks and Armenians. Dink’s assassination created an international uproar. On January 23, 2007, a funeral for Dink was held, which later turned into a public demonstration where a hundred thousand citizens marched in protest of the killing.

In recent years, indictments concerning the failed 2016 Gülenist coup reference the Dink’s assassination as “the first armed attack of FETÖ on the way to the coup.” However, given the political atmosphere in Turkey, the extent to which FETÖ and Dink’s murder are related is unclear. The Dink family’s lawyers have refrained from making any substantial comments until they have seen the indictment and definitive evidence.

On July 3, 2017, the retrial of 85 suspects involved in Dink’s murder began in Instanbul. Friends of Dink gathered outside the court holding “For Hrant, for justice” signs.

On July 17, 2019, a Turkish Court handed prison sentences for nine suspects involved with the assassination of Hrant Dink. By March 26, 2021, 37 acquittals, 26 convictions, 4 life sentences, and 2 aggravated life sentences were handed down in Dink’s murder case. His family released a statement expressing disappointment in the result of the case and appealed the ruling to the Istanbul 14th Heavy Penal Court on April 1, 2021, arguing that judgement had been too light for some defendants. On June 24, 2021, an Istanbul court ruled that if 12 fugitive defendants did not return within 15 days, they would be considered fugitives and have their assets seized. On March 4, 2022, a Turkish citizen and fugitive suspected of ties to Dink’s murder is arrested in Kyrgyzstan with a fake passport. Roughly three weeks later, the suspect is extradited from Bishkek, Kyrgyzstan to Turkey.

Hrant Dink was editor-in-chief of the Armenian-Turkish weekly newspaper Agos, a paper that seeks to provide a voice to the Armenian community and create a dialogue between Turks and Armenians. He was also a well-known commentator on Armenian affairs. Dink studied zoology and philosophy at Istanbul University where he became involved with Turkish leftist groups. He was jailed several times for his participation in this movement, and had since been involved with a number of civil society organizations.

In 2001, the Turkish government suspended publication of Agos when Dink wrote that “the laws [on the genocide] will cease to be a problem when Turkey shows consideration for the pain created by 24 April.” While the government brought legal action against Dink, he was found innocent and was permitted to resume printing Agos.

On February 13, 2004, Dink published an article entitled “Get to Know Armenia,” which discussed the modern day impact of the 1915-1917 Armenian massacres and urged Armenians to reject “the adulterated part of their Turkish blood.” Dink explained that he was writing a series of articles focusing on the Armenian Diaspora, and that the article was intended as a plea to Armenians to resolve their anger towards the Turks. However, the Turkish government interpreted this comment as an insult to Turkish blood, and Dink was consequently brought to trial for the article. On October 7, 2005, the Şişli Court of Second Instance in Istanbul handed Dink a six-month suspended sentence. Dink appealed the sentence and issued a protest, saying that “as long as I live [in Turkey], I will go on telling the truth, just as I always have.”

Following the October 7 sentencing, Hrant Dink was placed on trial for remarks that he made at a conference in 2002 that were deemed in violation of Article 301 of the Turkish Penal Code- “insult[ing] to the Turkish state.” According to Dink, the charges stem from remarks he made that criticized a patriotic verse Armenian school children are forced to memorize. He said that the lines “I am a Turk, I am honest, I am hardworking” were objectionable because “even though [he] was honest and hardworking, [he was not a Turk, [he] was an Armenian.” In addition, Dink was also critical of a verse in the national anthem that he felt was discriminatory for referring to the Turks as “a heroic race.” Dink was acquitted on February 9, 2006, although he still faced further charges of trying to influence the courts.

On July 12, 2006, Dink was handed a six-month suspended sentence for insulting Turkishness after writing an article which called for Armenians to “now turn their attention to the new life offered by an independent Armenia.” A week later, on July 19, the Istanbul Public Prosecutor opened a new case against Dink for referring to the 1915 massacre of Armenians as a “genocide” during a July 14 interview with Reuters.

Join us to hear @NK_Adjei read work from the 2022 Prison Writing Awards at Break Out on Dec 2nd. RSVP here: https://www.eventbrite.com/e/break-out-celebrating-the-2022-pen-america-prison-writing-award-winners-tickets-433513068257

The European Union has threatened to ban Twitter unless @elonmusk abides by its strict rules on content moderation, setting up a regulatory battle over the future of the social media platform, the Financial Times reported on Wednesday. https://www.reuters.com/technology/eu-warns-musk-that-twitter-faces-ban-over-content-moderation-ft-2022-11-30/