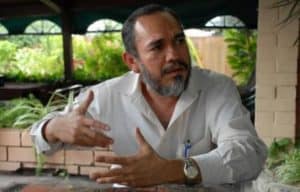 Editor of El Diario Co Latino, hailed by The New York Times as El Salvador’s “only independent newspaper,” Francisco Valencia continued to publish despite threats to the staff and a firebomb attack on his office in February 1991 in which most of the paper’s equipment was destroyed. The PEN/Barbara Goldsmith Freedom to Write Award, which Valencia received in 1991, helped to finance the paper’s return to full operations. The perpetrators of the firebomb attack were never apprehended.

As editor of El Diario Co Latino, Francisco Valencia wrote editorials critical of the U.S. military, and published cartoons and articles critical of El Salvador’s military and political leaders. As a result, he received repeated death threats, and was followed regularly by a car with darkened windows.

The paper’s offices were firebombed in February 1991, causing $275,000 worth of damage. Much of this was covered by labor unions in Sweden, Belgium, and the United States, who sent Valencia a combined sum of $100,000 out of solidarity. Despite a lack of evidence, the U.S. State Department accused a rebel coalition of firebombing the paper’s offices as part of a plot to blame and denigrate the government. No individual or group was ever brought to trial for the firebombing. In April 2021, the building that has housed El Diario Co Latino since 1960 was placed on the market. Valencia, compounding the effects of the COVID-19 pandemic and lack of government advertising revenue, considers the sale of the building an existential threat to El Diario Co Latino.

Valencia continues to face obstacles as part of his work. In January 2014 he was arrested for slandering a now retired police chief in 1996. Although he was released almost immediately, he was allegedly arrested again in 2014 because authorities failed to properly close the case in 1996. At the time of his 2014 arrest, Valencia was covering a corruption case against former president Francisco Flores. Valencia has used his platform to publicly push officials to seek accountability for threats against journalists. In September 2020, Valencia signed onto a letter to the Special Rapporteur for Freedom of Expression, Inter-American Commission on Human Rights, calling on him to rebuke the threats against journalists in El Salvador, especially those working for the newspaper El Faro.