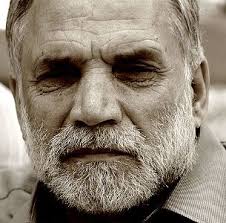 Blind playwright, poet, short story author, screenwriter, and lawyer Eşber Yağmurdereli has been in and out of prison since 1978, when he was convicted of “trying to change the constitutional order by force.” After 13 years, he was released in 1991 only to suffer ongoing persecution and frequent arrests for speaking out against the Turkish government’s human rights abuses; in 1998 he began a 23-year prison sentence for “supporting terrorism and spreading propaganda” because of his support for Kurdish rights. Yağmurdereli was a recipient of the PEN/Barbara Goldsmith Freedom to Write Award in 1999, and was released on January 18, 2001.

Turkish writer, lawyer, and human rights activist Eşber Yağmurdereli was born in Tortum, in the Black Sea region of Turkey, in 1945. In 1955 he lost his sight in an accident, and he began attending the Ankara School for the Blind in 1958. As a high school student, he published a journal with his friends, and later he earned a law degree and a doctorate in philosophy at the School of Law and Philosophy at Ankara University. He began practicing law in Turkey’s Black Sea region and during the 1970s defended many leading left-wing political figures, while gaining acclaim for his poetry and short stories. In addition to his distinguished literary and legal careers, he has also edited several magazines and political journals, including Yeni Eylem.
Yağmurdereli was first imprisoned in 1978 on charges of “trying to change the constitutional order by force” for allegedly leading a secret revolutionary group. He received a death sentence, which was later commuted to life in prison, or 36 years in jail in Turkey. After over thirteen years, on August 1, 1991, Yağmurdereli was released under a general amnesty on the condition that he not “reoffend.” He has been frequently detained for his work within Turkish literary and human rights circles and experienced episodes of torture and imprisonment, primarily for his sympathy for the Kurdish struggle for freedom and democracy.
In a speech delivered after his release in 1991, he referred to the Turkish government’s human rights abuses against the Kurdish community, asserting that the government had used brutality as an “instrument of repression” and had pushed people “into darkness” for too long. The speech came to the government’s attention in 1997, and Yağmurdereli was charged with supporting terrorism and spreading propaganda for the Kurdistan Workers Party (PKK). He was convicted and sentenced to one year in prison, with an added 22 years remaining from his previous sentence as this new crime broke the terms of his parole.
Yağmurdereli reportedly met his sentence with determination and resolve, believing that his imprisonment would be a rallying cry for change and help end the problem of people being punished for crimes of thought. He was temporarily released in November 1997 for health reasons, but returned to prison in 1998.
In 1999, Eşber Yağmurdereli received the PEN/Barbara Goldsmith Freedom to Write Award, and on January 18, 2001, he was released, after a review of his sentence under an amnesty announced in December 2000. Yağmurdereli is an honorary member of Swedish, Slovak, Canadian, Czech, and San Miguel PEN Centers, as well as PEN America.