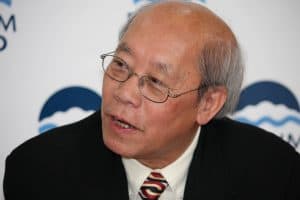 Doan Viet Hoat is a journalist from the south of Vietnam. After Saigon fell to the North Vietnamese in 1975, he was detained in a reeducation camp for 12 years. Upon his release, he founded Freedom Forum, a discussion group and newspaper that advocated free speech and the release of all political prisoners. Involvement in the group led to Doan’s renewed arrest in 1990 for allegedly attempting to overthrow the government. He was sentenced to 20 years’ imprisonment in March 1993, and in 1994 he was given the PEN/Barbara Goldsmith Freedom to Write Award. His sentence later was reduced to 15 years’ imprisonment and five years’ house arrest. He was released at the beginning of September 1998 as part of a large-scale prisoner amnesty to mark the country’s Independence Day, and he now lives in the United States.

Doan Viet Hoat was born in 1942 in Ha Tay, a province that has since been subsumed into the city of Hanoi. He earned his Ph.D. in education from Florida State University in 1971, after which he returned to Vietnam to become the vice president of Van Hanh University, a Buddhist institution. When the North Vietnamese took over southern Vietnam and instituted a communist government, it undertook mass arrests of intellectuals, which included Doan viet Hoat. Hoat was detained without trial for 12 years. During this time, he was sent to a north Vietnamese prison whose conditions were believed to be among the harshest in the country. Despite suffering from a kidney disorder sustained during a previous incarceration, Hoat was unable to access required medical supplies while in prison. In addition, he was only fed two meals a day consisting of rice and vegetable water; he was kept away from sunlight for long periods of time; and he was denied adequate clothing to keep him warm.

Upon his release, he founded Freedom Forum, a discussion group and underground magazine that was essentially a collection of documents and articles passed from reader to reader. Pieces in Freedom Forum were written by Vietnamese and foreign citizens proposing peaceful political reform in Vietnam and criticizing government policies. Although none of the documents advocated for violent action against the state, Hoat was arrested and detained without trial. In March 1993 he was sentenced to 20 years’ incarceration for “attempting to overthrow the people’s government,” but continued to release statements critical of the government while in prison. After intense international pressure, including by then UN Secretary General Kofi Annan, he was released in 1998 and sent into exile in the United States.