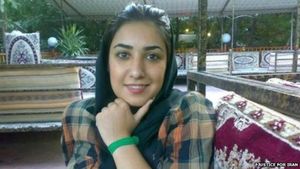 Atena Farghadani is an Iranian artist and political activist. She was first arrested in August 2014 for a cartoon she drew lampooning a family planning law, which depicted lawmakers as animals. After being released on bail, she was rearrested on January 10, 2015, for creating “propaganda against the regime” and several counts of insulting Iran’s government. In June 2015, she was sentenced to 12 years and 9 months in prison on charges of spreading propaganda, insulting the members of parliament through paintings, and colluding against national security. In April 2016, an appeals court reduced her sentence to 18 months. On May 3, 2016, Farghadani was released from Evin Prison.

Atena Farghadani was first arrested in August 2014 after publishing a cartoon on Facebook depicting members of the Iranian Parliament as animals, in protest of a proposed law that would restrict access to women’s birth control and right to divorce. The authorities also brought charges of “gathering and colluding with anti-revolutionary individuals and deviant sects” against Farghadani for her art exhibit entitled Parandegan-e Khak (Birds of Earth), which honored those killed after Iran’s 2009 disputed election. Relatives of political prisoners and members of the Baha’i community attended the exhibit.

Upon arresting Farghadani, the Revolutionary Guards blindfolded her, searched her house, and confiscated her personal belongings. She was held in solitary confinement for five days in Evin Prison, after which she was transferred to a shared cell. She went on a hunger strike due to her treatment there and was again put in solitary confinement for 10 days. Farghadani later told media she was interrogated for nine hours a day over a one-month period at Evin Prison. While in jail, she wrote several letters, including one to Supreme Leader Ayatollah Ali Khamenei, calling on him to defend free expression, Iranian citizens, and the Baha’i faith.

She was released on bail in November 2014, and in December 2014 filmed video testimony about her treatment in detention. Farghadani said that prison guards beat her and conducted degrading body searches. The testimony also exposed that the prison uses video surveillance outside the showers and bathroom areas.

Farghadani was quickly rearrested in January 2015 and held in Gharchak Prison, which is well-known for its disastrous conditions, because of the video she released about her treatment in Evin Prison. Following her rearrest, Farghadani began a hunger strike that lasted three weeks, until she was forced into hospitalization after suffering a heart attack and losing consciousness. She was eventually moved back to Evin Prison, where she remains in solitary confinement. In August 2015, the International Campaign for Human Rights in Iran reported that Farghadani had developed signs of lymphatic disease.

Additionally, in August 2015, she faced the possibility of an even longer sentence after being accused of an “illegitimate sexual relationship short of adultery” with her lawyer Mohammad Moghimi for shaking his hand when he came to visit her in prison. Prior to the trial for these charges, Farghadani was forced to undergo a “virginity test” and pregnancy test on August 12, 2015. Judicial authorities took Farghadani to a medical center near the prison to investigate the charge of an “illegitimate sexual relationship short of adultery” against her. However, Farghadani and Moghimi were acquitted of the handshake sentence as of January 16, 2016.

In April 2016, an appeals court reduced her sentence to 18 months. On May 3, 2016, Farghadani was released from Evin Prison.

NYC! Don't miss our talk with world-renowned artist and human rights activist Ai Weiwei (@aiww) on 11/2 - the release date of his highly anticipated memoir, 1000 YEARS OF JOYS AND SORROWS - at @BAM_Brooklyn. Tickets: https://bit.ly/3j1Mknt.