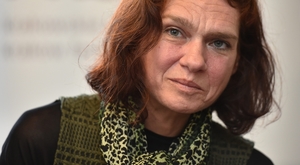 Aslı Erdoğan is a renowned novelist and writer. She was also a columnist for the Özgür Gündem newspaper, a pro-Kurdish daily, and a member of its advisory board. On August 16, 2016, Erdoğan was detained from her home by Istanbul police. Her arrest came alongside the arrest of more than 20 other journalists and employees from Özgür Gündem, which was shut down by decree as part of the state of emergency in the country following the failed coup of July 15, 2016. Turkish courts stated that the outlet made “propaganda for the PKK,” the Kurdistan Workers Party, which is listed as a terrorist group, and acted “as its de facto news outlet.” Aslı Erdoğan herself was charged with “the destruction of the unity of the state,” “being a member of a terrorist organization,” and creating propaganda for a terrorist organization. The first charge carried a punishment of an aggravated life sentence, while the second two carried fifteen and two-and-a-half-year sentences, respectively.

On November 23, 2016, an Istanbul court dropped the charges of disrupting national unity against Erdoğan and eight others, including Necmiye Alpay, charged in the case; however, the terrorism charges were retained, and the initial indictment sought an aggravated life sentence for Erdoğan, as well as the other writers and activists associated with Özgür Gündem. On December 29, 2016, as the trial opened, Erdoğan was granted a conditional release from detention and was released under a travel ban that evening. The travel ban was finally lifted for both Erdoğan and fellow defendant Necmiye Alpay on June 22, 2017.  As a result, Erdoğan escaped to Germany in self-imposed exile in order to avoid prosecution. Meanwhile, the trial of Erdoğan and her colleagues continued intermittently for several years.

During the fifteenth hearing of the trial against  Özgür Gündem on January 13, 2020, prosecutors requested that Erdoğan be sentenced to between 1 year, 9 months and 9 years, 4 months in prison for “making propaganda for a terrorist organization.” However, at the final hearing in her case on February 14, Erdoğan was acquitted of all charges of making terror propaganda. In June 2020, months after she was acquitted, a public prosecutor appealed her case to a higher appeals court in Istanbul. On June 10, 2021, this secondary court of appeals decided to reopen the case against her, further prolonging her trial and Turkish authorities’ judicial harassment. Due to the charges levied against her, Erodğan was unable to return to Turkey. On February 10, 2022, Erdoğan was acquitted in the case.

In her writing, Aslı Erdoğan tackles controversial issues such as torture, human rights violations in prisons, violence against women, and Kurdish rights. As a novelist, Aslı Erdoğan’s first novel, Kabuk Adam (Shell Man), was published in 1994 and has since published 7 books. Her short story “Wooden Birds” received the first place prize from Deutsche Welle radio in a 1997 competition, and her second novel, Kirmizi Pelerinli Kent (The City in Crimson Cloak), received numerous accolades abroad and has been published in English. Her texts have also been translated to French, and in 2005 she was shortlisted by respected French literary magazine, Lire, as one of the “50 most promising authors of tomorrow.” She has previously written for the Turkish left-wing newspaper Radikal. As a result, she has been persecuted, lost numerous jobs, has been subjected to smear campaigns, and has been forced into exile for several years.

Özgür Gündem, meaning “free agenda,” was founded in 1992 and reported on the Kurdish-Turkish conflict; the newspaper was frequently under investigation and fined, and many of its journalists arrested, until it was shuttered by decree in 2016.

June 29, 2020: Erdoğan’s case and acquittal are appealed in a secondary court of appeals by a public prosecutor unrelated to Erdoğan’s original case. These courts (Istinaf Mahkemeleri) were created after the attempted military coup in 2016, and are used as a “second degree” judicial system to reverse or challenge decisions of lower courts, particularly those decisions unfavorable to the AKP-led government. The court’s decision is pending, and her legal counsel will appeal once a decision is handed down. PEN Germany has called for the charges to be dropped, and for an end to the legal harassment of Erdoğan.

February 14, 2020: In the final hearing on her trial, Erdoğan is acquitted of all charges. Erdoğan is not present for the trial, but delivers a statement through her lawyer stating that the “political content” in her writing was “limited to human rights violations.”

January 13, 2020: During the 15th hearing of the main trial of the Özgür Gündem newspaper on January 13, 2020, prosecutors request that Erdoğan be sentenced to between a minimum sentence of one year ten months to a maximum sentence of nine years three months in prison for “making propaganda for a terrorist organization.”

October 2017: Erdoğan exercises her newly recovered right to travel and goes to Germany to accept the Erich Maria Remarque Peace Prize and to attend the Frankfurt Book Fair. She stays in Germany, and has lived in Europe in self-imposed exile since. Proceedings against Erdoğan and her colleagues continue in Turkey later that month, but are closed to the public under a state of emergency decree.

August 31, 2017: In an interview with Turkish authorities, Erdoğan states, “They [the Ministry of the Interior] are implying ‘We can play with you like a cat with a mouse. This is psychological torment. A heavy one at that’.”

September 2017: Despite Erdoğan’s travel ban being lifted in June, she still requires permission from the Interior Ministry to travel abroad. PEN believes that the charges against Erdoğan relate solely to her peaceful exercise of her right to freedom of expression, and calls on the Turkish government to lift the ban.

June 22, 2017: An Istanbul court lifts the travel ban on both Erdoğan and fellow defendant Necmiye Alpay, officially allowing her to travel abroad to speak, attend events, and collect prizes. However, terrorism charges against her remain.

January 2017: Erdoğan returns to court where a judge rejects her defense team’s request to have the travel ban against her lifted. Her next court date will be in March 2017.

December 29, 2016: Erdoğan is granted conditional release from prison after spending 132 days behind bars, but is placed under a travel ban. Despite her release, Erdoğan continues to face charges “making propaganda for a terrorist organization” and “membership in a terrorist organization,” for which she could face up to seven years in prison.

November 2016: The Istanbul Chief Public Prosecutor’s Office sends an indictment to the Istanbul High Criminal Court demanding aggravated life sentences for a total of nine suspects, including novelist Aslı Erdoğan and linguist Necmiye Alpay, in the investigation against shuttered daily Özgür Gündem. Later that month, an Istanbul court drops the charges of “disrupting national unity” against Erdoğan and eight others charged in the case; however, the terrorism charges still stand, and the indictment seeks an aggravated life sentence for Erdoğan, as well as the other writers and activists associated with Özgür Gündem.

August 16, 2016: Aslı Erdoğan is arrested and detained in Istanbul on preliminary charges of “membership of a terrorist organization” and “undermining national unity.” She is placed in pre-trial detention, and held without formal charges levied against her. In an interview given to the Turkish daily Cumhuriyet from the detention centre where she was held, Erdoğan, who suffers from asthma, chronic obstructive pulmonary disease and diabetes“ said that she was being held in awful conditions and had been denied essential medication and requests for water.

July 15, 2016: An attempted military coup carried out against the AKP-led Turkish government fails and President Erdoğan’s regime remains in power. In the aftermath of the coup, the government carries out mass arrests and begins a crackdown on free expression.

Following the coup attempt on July 15, 2016, over 180 news outlets were shut down by presidential decree under a state of emergency. These state of emergency laws were codified with the passage of a new constitution by President Recep Tayyip Erdoğan’s AKP-led government in April 2017, which greatly expanded presidential powers. During 2019, Turkey held the third-most writers and public intellectuals in jail for their free expression, according to PEN America’s Freedom to Write Index.

Over 165 media outlets and publishing houses have been shuttered since July 2016. At its highest point after the coup, 160 journalists were jailed in the country, and as of late 2019 over 120 remain behind bars, making Turkey the biggest jailer of journalists in the world, surpassing China and Eritrea combined. Over 107,000 civil servants were dismissed in the aftermath of the coup, and more than 50,000 people have been jailed pending trial. Turkey’s Kurdish population has been disproportionately affected, with arrests of Kurdish journalists and MPs, closures of pro-Kurdish media outlets, like Özgür Gündem, and the forced replacement of elected local officials.

The City in Crimson Cloak

The Stone Building and Other Places

“Aslı Erdoğan – An interview shortly after her release from jail”