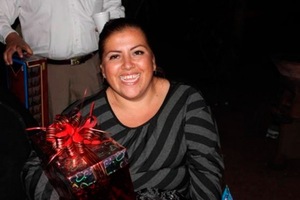 Anabel Flores Salazar, a 32-year-old journalist from Veracruz state in Mexico, was found dead on February 9, 2016, along a highway in neighboring Puebla state. The coroner determined that she had been suffocated to death. Early morning on February 8, 2016, a group of armed men entered Flores Salazar’s house and abducted her. The Veracruz authorities have stated that they are investigating the case. On February 13, 2016, Veracruz’s governor Javier Duarte de Ochoa linked an already detained drug cartel member with Flores Salazar’s murder. In May 2016, one suspect was detained and in August 2016 a second was arrested on suspicion of being the mastermind behind the murder.

Anabel Flores Salazar was a reporter for El Sol de Orizaba and covered crime, police activity, murders, and car accidents in Veracruz. It is reported that she had recently published an article on the case of a store owner who had been shot dead. Flores Salazar was also investigating the mysterious deaths of teenage girls in Veracruz. She had previously worked as a contributor for dailies El Mundo de Orizaba and El Buen Tono, whose offices had been attacked by a group of unidentified gunmen earlier in 2011.

On February 8, following her abduction, Governor Duarte issued a tweet stating that the authorities were following her case closely, and on the same day, the state prosecutor’s office released a statement claiming Flores Salazar had links to an alleged member of an organized crime group. The member, Victor Osorio Santacruz, known as El Pantera, had been present at the same restaurant as Flores Salazar when he was arrested, according to Flores Salazar’s family.

A day later, on February 9, 2016, Flores Salazar’s body was found along a highway in Puebla state. She was half-naked, with hands and feet bound, and a plastic bag over her head.

Since Governor Duarte took power in 2010, however, 15 journalists have been killed and another three remain missing, leading NGOs and press freedom defenders to point out that Duarte and the Veracruz government continue to fail to achieve justice in the murders of these journalists and in providing adequate protection and safety resources for the journalists currently working in Veracruz.