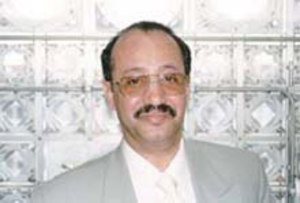 Ali Al-Domaini was a well-known poet and writer from Saudi Arabia. As a political activist, he campaigned for a move to constitutional monarchy and democracy in the kingdom. Al-Domaini was detained along with 11 other leading Saudi intellectuals for criticizing the National Commission on Human Rights (NCHR) and for planning to set up their own human rights organization. On April 4, 2005, Al-Domaini received the 2005 PEN/Barbara Goldsmith Freedom to Write Award. On August 8, 2005, newly crowned King Abdullah of Saudi Arabia issued a royal pardon to Ali Al-Domaini and his two co-defendants and ordered their immediate release from prison. Al-Domaini passed away at the age of 74 as a result of a terminal illness on April 25, 2022.

Reportedly, Al-Domaini had no passport, which prevents him from traveling outside the country. In addition, the Saudi government denied Al-Domaini the right to work. PEN considers the harassment of Al-Domaini to be in direct conflict with the ideas of freedom of expression outlined in Article 19 of the International Covenant and Civil and Political Rights.

In March 2004, Al-Domaini was detained criticizing the National Commission on Human Rights (NCHR) and for planning to set up their own human rights organization. The NCHR, the kingdom’s first human rights watchdog, was approved in early March by the Saudi government. However, many liberal and opposition figures wanted to see speedier and more radical change than that being offered by the government. A Ministry of the Interior official reportedly announced that the detainees were suspected of issuing “statements which do not serve the unity of the country and the cohesion of society… based on Islamic religion.”

Eight of the other detainees were subsequently released, but Al-Domaini was thought to be among those charged after refusing to sign a document renouncing their political activism. Al-Domaini was accused by the authorities of threatening national unity, doubting the independence of the Saudi judiciary, organizing meetings and justifying violence, among other charges. His trial reportedly started on August 9, 2004 at an Islamic court in Riyadh. This was thought to be the first public political trial in Saudi history. The trial was initially adjourned in October 2004, when all three defendants refused to answer questions in a closed hearing. The trial resumed the following year and on May 15, 2005 Al-Domaini was sentenced to nine years in prison for “disseminating news.” His co-defendants, Matrook Bin Hayes Al Faleh and Abdulla Bin Hamid Al Hamid were sentenced to six and seven years respectively. In addition to their sentences, all three were required to sign a document promising to halt any behavior that would “prejudice the general good of the public and the country” and to halt any activity that would “be detrimental to the unity of the country and its security.”

October 2017: Al-Domaini and his rich contribution to modern poetry and literature are celebrated by a Saudi poetry festival which is now named after him.

August 31, 2011: Al-Domaini’s poems are translated into English and published as a section of the book Gathering the Tide: An Anthology of Contemporary Arabian Gulf Poetry by Apollo Books.

2008: Al-Domaini publishes his new book of poems As We Open the Door.

August 8, 2005: Al-Domaini and his co-defendants are pardoned by newly crowned King Abdullah.

May 15, 2005: Al-Domaini is sentenced to 9 years in prison for disseminating news.

April 4, 2005: Al-Domaini is honored by PEN America as a recipient of 2005 PEN/Barbara Goldsmith Freedom to Write Awards.

August 9, 2004: The trial against Al-Domaini and two other defendants starts.

March 15, 2004: Al-Domaini is arrested alongside 11 other intellectuals.