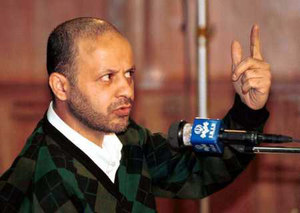 After being released from prison in 2006, Akbar Ganji fled Iran. He has been granted honorary citizenship in several European cities and he now lives in exile in the U.S. He is a columnist for The Huffington Post and a prolific writer, and has been continuing to give talks throughout Western Europe and North America advocating for democracy in Iran. His writings have been banned in Iran.

Akbar Ganji is considered Iran’s leading investigative journalist. He is also the author of the best-selling book Dungeon of Ghosts, a collection of Ganji’s newspaper articles published in early 2000, in which he implicated the former president Akbar Hashemi Rafsanjani and other leading conservative figures in the “serial murders” of five writers and intellectuals in 1998. The book is said to have seriously damaged the reputation of Rafsanjani, and is thought to have been a major factor in the conservative defeat in the parliamentary elections of February 2000.

Ganji was arrested on April 22, 2000, following his participation in an academic and cultural conference held at the Heinrich Böll Institute in Berlin on April 7-9 entitled “Iran after the elections,” at which political and social reform in Iran were publicly debated. He was sentenced on January 13, 2001, to 10 years’ imprisonment plus five years’ internal exile. He was reportedly detained incommunicado for 80 days, and allegedly tortured in detention. It is also reported that Ganji staged a hunger strike to protest his treatment in prison.

On July 16, 2001, Ganji was again sentenced to six years in prison on charges of collecting confidential information that harms national security and spreading propaganda against the Islamic system for his attendance at the Berlin conference and for a series of articles he had written implicating leading Iranian political figures in the 1998 murders of several dissidents and intellectuals.

Ganji was reportedly allowed home on parole for five days on December 5, 2001. On October 15, 2003, Ganji appeared before an examining magistrate to answer questions about his book, Prison-like Archipelago. There are said to be several cases pending against Ganji for articles he has written, including charges of “propaganda against the regime” and publishing lies, insult, and libel.

The authorities had granted Ganji medical leave on May 29, 2005. Ganji supposedly went missing on June 7, which led to an issuing of a warrant for his arrest. In a letter distributed by his wife, he denies that he went into hiding or had broken any law. He was outspoken in his criticisms of the Iranian government during his leave and suggests that this has led to his re-imprisonment. He was returned to Tehran’s Evin Prison on June 11, 2005. After he was returned to solitary confinement he resumed his hunger strike and over the next month lost over 22 kilograms. On July 17, 2005, he was rushed to the hospital in Northern Tehran, where he finally ended his 60-day hunger strike. On Nov. 2, 2005, Human Rights Watch reported that Ganji said that Judiciary officials have tortured him to renounce his writings.

Akbar Ganji is also an Honorary Member of the Canadian, English and Lichtenstein PEN Centers. He is a recipient of the Canadian Journalists for Free Expression 2000 International Press Freedom Award.

Akbar Ganji on Writing and Freedom of Expression in Iran