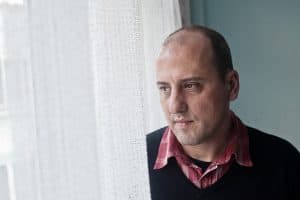 Ahmet Şık is an investigative journalist and writer dedicated to reporting on human rights abuses and government actions in Turkey. He was charged on December 30, 2016, with disseminating “terrorist propaganda” and “denigrating the Turkish Republic” in news articles and tweets. The trial of Ahmet Sik, as well as of 17 other writers and administrators associated with the paper Cumhuriyet, began on July 24. Şık was also on trial on charges of “membership of an armed organization” related to the ongoing Ergenekon investigation from 2011, as well as “threatening” judges and prosecutors in remarks made upon his release from detention on March 12, 2012.

Ahmet Şık is a graduate of the Communications Facility Department of Journalists of Istanbul University. In his reporting career of over two decades, he has worked for Milliyet, Cumhuriyet, Evrensel, Yeni Yüzyıl, and Radikal; he has also worked as a photo journalist and academic. He has come into conflict with Turkish authorities many times over the years for his work and even fled the country for a year in 2009 over fears of reprisal for critical articles about officials.

On March 7, 2011, Şık was arrested alongside Nedim Şener, and on March 11, 2011, both were formally charged with “membership of an armed organization” under Turkey’s Penal Code Article 314/2. These charges accuse ODA TV (a news website he contributed to) of being the media wing of Ergenekon, an alleged clandestine secular nationalist organization in Turkey with members in the military and security forces, and plans to overthrow President Recep Tayyip Erdoğan. The trial began on April 14, 2011, and in August it was announced that 14 people had been indicted in the case, including writer Hüseyin Soner Yalçın and journalists Coşkun Musluk and Sait Çakır.

Though the trial purported to be related to documents relating to state security, said to have been found on the ODA TV computers, an investigation concluded that the documents had been placed there by a virus and there was no evidence that they had been opened. The defendants claim that the trial was initiated because of their work reporting that members of the Gülen movement were involved in police activities. It is reported that, at the time of his arrest, police seized Şık’s unpublished manuscript of Imamın Ordusu (The Imam’s Army), an investigation into the alleged affiliation of Turkey’s police to the Gülen movement. The book was subsequently banned; however, the book was published in November 2011 under the title OOO Kitap (OOO Book) to avoid the ban on the original title.

On March 12, 2012, Şık was released pending trial, with the judge citing changes to the charges as well as time already spent in pre-trial detention. As he left Silivri prison, he spoke to news crews, saying, “The police, prosecutors, and judges who plotted and executed this conspiracy will enter this prison.” This comment led to further charges of “threatening” the judges and prosecutors and announcing them as “targets for terrorist organizations.” He was indicted under Articles 106/2-d, 43/1, 53, 125/1, 125/3-a, and 125/4 of the Turkish Penal Code (Law No. 5237) on July 3, 2012, with the prosecutor seeking 3-7 years in prison. Both trials are ongoing.

In March 2015, Şık was charged with defamation against former transport minister Binali Yildirim in his book titled Paralel Yürüdük Biz Bu Yollarda (We Walked Parallel On This Road). He was convicted on December 15, 2015, and sentenced to pay a fine of 4,000 TL.

On December 29, 2016, Şık was detained, and formally arrested once again on December 30, for spreading “terrorist propaganda” and “denigrating the Turkish Republic” in tweets and articles allegedly supporting the outlawed Kurdistan Workers’ Party (PKK) and, ironically, the Gülenist movement (FETÖ), which he has consistently criticized, and which his banned book The Imam’s Army sought to expose.

On March 9, 2018 Ahmet Şık was released. Meanwhile, he continues to call for the release of all jailed journalists in Turkey.

Ahmet Şık has been awarded a number of prizes for his journalism in Turkey, including UNESCO’s 2014 Guillermo Cano World Press Freedom Prize. He is an honorary member of PEN Turkey and Danish PEN.

Joint Press Conference on Ahmet Şık and Freedom of the Press in Turkey, February 3, 2017