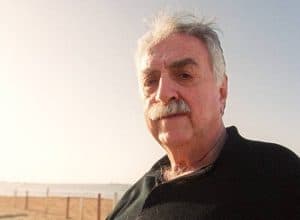 Editor of the literary magazine Souffles, Abraham Serfaty served a life sentence from 1974 until his release from prison in September 1991. He was sentenced solely on account of his political and literary activities. Serfaty attributed his release in no small part to the campaign mounted on his behalf by his wife, Christine Jouvin, and by PEN, which awarded him the 1991 PEN/Barbara Goldsmith Freedom to Write Award shortly before his release from prison. Serfaty died in Marrakech in November 2010.

Abraham Serfaty was born in 1926 in Casablanca, in what was then the French protectorate in Morocco, to a middle-class Jewish family. In the 1940s, while studying engineering in France, he joined several communist parties. He remained active within them through his return to Morocco in 1950 and Moroccan independence in 1956. He remained a member until 1970, when he grew disillusioned with communist party bureaucracy, and formed the Marxist-Leninist organization known as Ila al-Amam. The group was opposed by the monarchy of King Hassan II, and Serfaty was arrested and tortured in 1972, but released following student protests. He went into hiding but was arrested again in 1974, and in 1977 he and four others were charged with “plotting against state security,” and sentenced to life in prison.

Serfaty was released in 1991 after receiving the PEN/Barbara Goldsmith Freedom to Write Award, and following an international campaign led by his French wife, Christine Daure, and Danielle Mitterand, wife of then president Francois Mitterrand. Serfaty’s Moroccan citizenship was revoked upon his release, causing him and his wife to be exiled to France, where he continued to criticize the Moroccan government. His citizenship was reinstated in 1999, after King Mohammed VI ascended to the throne and implemented progressive social reform. Serfaty died in 2010 at the age of 84.