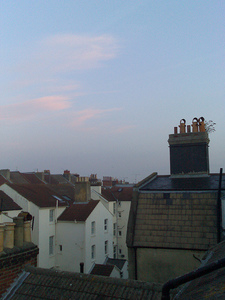 This piece was submitted by Kevin Barry as part of the 2014 PEN World Voices Online Anthology.

Early one summer morning, I sat with her among the rooftops of the city and the fat white clouds moved slowly above us – it was so early as to be a city lost in sleep, and she was really very near to me. My want for her was intense and long-standing—three months, at least; an eternity—and I was close enough to see the opaque down of her bare arms, each strand curling like a comma at its tip, and the tiny scratched flecks of dark against the hazel of her eyes. She was just a stretch and a clasp away. The city beneath was lost to the peaceful empty moments of 5 a.m.—it might be a perfect Saturday of July. All I had to do was make the move.