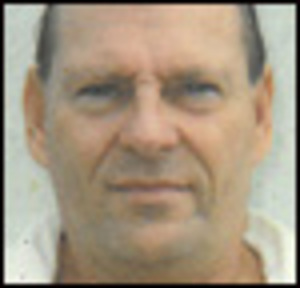 Charlie checked the Jiffy Mart from the phone booth. Old Leonard would be closing soon. He tried to imagine the look on the old man’s face when he saw the gun.

He pulled the pistol from his pocket and looked at it again. A .38 caliber. He didn’t know the make or model. All he knew was when he had it he was a big man.

Charlie had suffered from “little man’s complex” all his life. He wasn’t really small enough to have a complex, he just did. He had tried being a bully, but that had gotten him beaten up several times. Still, he never lost an opportunity to prove to himself that he was tough, or smart, or fast, or any number of things he wasn’t.

When Charlie had paroled the first time he was sure people would respect him because of his tattoos. He acted as he did before, people responded as they had before. When he paroled the second time, with more tattoos, he was even more sure people would respect him. Surely someone of his experience was to be respected. Charlie was dumbfounded to learn that children and little old ladies were the only ones who showed something even close to what he considered respect. Of course after Charlie’s early childhood and first 20 years of adult life, his thinking was so distorted that he could no longer grasp what real respect was. The concept of fear and respect were hopelessly confused in his mind. Was it the abuse he suffered at the hands of the aunt who raised him? Was it something from prison? No one knew. Charlie had driven away every friend that he had ever had. Everyone made him feel like a nobody. He noticed movement at the Jiffy Mart. A customer leaving. It was time and soon old Leonard would know he was somebody.

He told himself that if the old man made one smart-ass remark he would shoot him on the spot. The old man had already shown a marked lack of respect. Leonard had no right to be as cocky as he was. Why he was hardly bigger than Charlie and had to be 60. Like the day he had ejected the shoplifters. That old cuss actually slapped one of them up side the head. “If he had done me like that. . .“ Charlie’s thoughts trailed off as he felt apprehension swell up inside. “I’m not afraid of that old bastard.” He realized he said this aloud. He looked at the revolver again. Time to do it.

The isolated location of the Jiffy Mart seemed to make it an ideal mark. The fact that his residence was only two miles away didn’t seem to be an obstacle to his plan for quick money. Those who do not learn from their mistakes are bound to repeat them.

As Charlie neared the entrance of the store, he noticed the old man had removed his shirt. In his tank top style undershirt his numerous tattoos were visible. So this was why the old man always wore long sleeves. He found himself stopped at the front door. Then his heart skipped a beat as the old man turned and looked directly at him. Seconds passed. The old coot just stared. Then he turned away and returned to the mundane task of closing up. Charlie pushed ever so lightly on the door. The bolt rattled in its housing. The door was locked. He felt relief. Then he cussed the old man under his breath. “You’re a lucky old S. O. B., Leonard. I’d of . . .“ He stood there looking at the road and thought of his leaking frame house only two miles away. He fumed at his inheritance. He should have been given more land. Instead, he was given only a few acres and that shack. His brother, Wayne, had always been favored, he had . . . Charlie was startled by a rattling. Before he could snap to, old Leonard was standing there asking, “You need something, kid?” He stood frozen staring at the old man. “Well, sonny, if you need something you better say something cus I’m closing.”

“I’m 41, old man.” There, he had spoken defiantly; he wasn’t afraid of Leonard. The old man’s eyes squinted producing a deep set of crow’s feet at each temple. “Listen, son, I don’t give a good shit how old you are. You either gonna buy something and damn fast, or I’m lockin’ the door.” The old man’s stare intensified.

“Uh, yeah, uh. . . some beer.” Charlie stood frozen. Old Leonard looked him up and down, his eyes stopping for a moment at the bulge in his jacket pocket. He knew. Somehow this old man knew.

Leonard stepped back and held the door. “Well, I don’t deliver, hurry your ass up.” Charlie stepped in as if walking through a minefield. He walked to the cooler, retrieved a six-pack not noticing the brand. His mind was racing. As he set the six-pack on the counter the old man leaned over and asked, “Just what the hell are you up to, sonny boy? What’s this supposed to be, a gosh-damn stick up?” Charlie was caught completely off guard. As he reached his hand into his pocket the old man held up a hand.

“Before you pull that piece, let me tell you something, Charlie. I don’t intend to give you a mother scratch’en dime. As long as you don’t show me that, whatever it is you got stashed in your jacket, I can sell you this six-pack of friggen soda you call beer and forget this. But you pull a damn gun on me and I swear I’ll make you kill me. There ain’t a chance in hell you’ll get away with this. So make up your mind. And do it now, sonny boy.” Charlie was trembling so hard he couldn’t conceal it. At that moment car lights flooded the store entrance.

As if things weren’t bad enough, a law man. A dammed county lawman. A big lumbering uniformed officer exited the car, pushed on the front door and asked, “You still open, Leonard?” He shot a cold stare at Charlie. “Yeah flat foot, may as well, I’m wait’n on this snot-nose kid already.” Charlie laid a five dollar bill on the counter. The big officer stopped for a moment. “Everything okay, Leonard?”

“No. Hell no, everything ain’t okay, it’s 10 minutes after midnight and I got a fat-ass cop and snot-nose punk still mill’n around. Ya’ll got one minute and I lock ya’ll up in here.” Charlie hurried out without collecting his change. The big officer set a big bag of chips and a candy bar on the counter. He watched Charlie until he was out of sight. “That guy is trouble.” Leonard met the big officer’s stare. “Was a time they said that about me.” The big officer laughed out loud. “Hell, Leonard, you were trouble. Ain’t that old Minnie Preston’s nephew?” Leonard looked up and answered, “Don’t know, don’t care.” With the big guy’s sense of humor completely dampened he paid for his chips and left, grumbling under his breath.

The door came almost off its hinges. Not because Charlie was a powerful kicker, but because it was so old and dilapidated. The mutt that he had been abusing for the last two months ran for the couch. After scurrying under the couch she poked her snout out looking up at her master as only a loyal dog can do. “That old bastard!”

Charlie felt as if his brain would explode with rage. “That old bastard called the cops, I know he did.” He kicked at the coffee table sending it flying through the air. He flung the six-pack of grape soda he had mistaken for beer against the wall. He leaned over and called to the mutt. She came hugging the floor, tail between her legs. Charlie looked down at the dog. Seeing something of himself in the quivering mass he again lashed out, burying the toe of his boot into the dog’s ribs. The force sent the mutt into the corner with several broken ribs. It was then Charlie noticed the small mound on the floor.

“You shit on the floor again?” The mutt was trying to get to her feet when Charlie pulled the revolver from his jacket pocket. In a complete rage now he leveled the front sight on the dog. “Die, you bitch!” One shot, a second, a third. Six in all, the shots echoing in the darkness.

The first round knocked a tuft of fur from the muff’s hip, the force spun the animal around. The exiting bullet splattered the water stained sheet rock with blood as it penetrated the clap board sheathing. The second round clipped the dog’s foreleg, almost severing it. The third hit low in the ribcage, glancing down through the stomach and spilling intestinal fluid out in a stream. The fourth round struck the floor well in front of the animal sending splinters into the air. The fifth round struck the shoulder at a sharp angle, slashing open a six-inch gap, then glanced away. The mutt lay bleeding profusely. Charlie then kicked at the bleeding, whimpering animal.

Leonard opened the store at 7:00 a.m. as he had done for years. He had just opened the front door when the big county officer pulled up. He again lumbered his way into the Jiffy Mart. “Say Leonard, did you hear about Minnie Preston’s nephew? Charlie something? He tore up the old house that Minnie left him, then blew his brains out. Shot the dog, too.” Leonard didn’t acknowledge.

“Hell Leonard, that could have been you. They placed the time of death about 1:00 a.m. A constable thought he heard a shot.” Leonard looked up with his usual cold stare. “Shot the dog, huh? Shameful killing.”