A Report on PEN’s SCOTUS Hearing 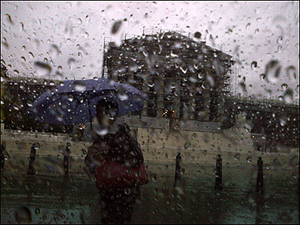 On a day when the rest of Washington was shuttered and hunkered down for Hurricane Sandy, the Supreme Court stuck it out and heard arguments over whether PEN and our co-plaintiffs have “standing” to press our lawsuit challenging the National Security Agency’s massive telephone and Internet surveillance program. To establish legal standing to sue, parties need to show that they have been harmed by the law they are challenging; from the moment Justice Sotomayor interrupted Solicitor General Donald B. Verrilli’s opening statement to ask whether, in the government’s view, anybody would ever be in a position to challenge the top secret surveillance program, it was clear that the justices were prepared to take a hard look at the impact of the program on human rights advocates, lawyers, and journalists who communicate regularly with clients and colleagues overseas. As Lyle Denniston has just posted in an excellent recap on SCOTUSblog.com,

Although the government’s top lawyer in the Court, Solicitor General Donald B. Verrilli, Jr., argued that no one should be allowed in court to contest this program unless they can show that the government’s potential overhearing of sensitive legal conversations is close to a certainty, several of the Justices seemed wary of making it that difficult to bring a challenge when it is entirely likely that such monitoring has occurred, or will occur. Indeed, some of the Justices — especially Justice Ruth Bader Ginsburg — were clearly put off by the prospect that no one would ever be able to sue, not even lawyers who had actually cut back on how they represent their clients out of fear of being monitored.

With the exception of Justice Clarence Thomas, who remained characteristically silent throughout the hearing, the justices peppered both Verrilli and ACLU attorney Jameel Jaffer with questions that suggested the court recognized that the surveillance powers authorized by the FISA Amendments Act were extraordinarily broad and would pose challenges to organizations and individuals who routinely engage in confidential communications with clients overseas. As Denniston noted, Justice Anthony Kennedy led two of the session’s most significant exchanges:

Kennedy at one point appeared to be convinced that the government was, in fact, making full use of what he called the “wide-ranging power” to expand the global eavesdropping under expansive changes enacted by Congress in 2008. “It is hard to think that the government is not using all of its powers to protect the country,” Kennedy said, suggesting that the challengers might well be right that the expanded program was so broad that it was actually picking up many sensitive conversations that might not have been monitored in the past. And, Kennedy added, a lawyer who was representing an individual who might be targeted as a potential terrorist would actually “engage in malpractice” if that attorney did not take steps to protect conversations with the client or with the client’s family members from being monitored. Picking up on Justice Kagan’s repeated comments about lawyers’ ethical obligations to their clients, Kennedy appeared tempted to conclude that lawyers had, in fact, already suffered professional harm that might be sufficient to give them “standing” to sue to challenge the program.

I will post more about the proceedings over the next few days; meanwhile The Washington Post has also posted a great early wrap up of the hearing, here. And the Supreme Court has just posted today’s transcript, which is here. Full audio from the hearing will be posted in about a week.