A Person of Interest 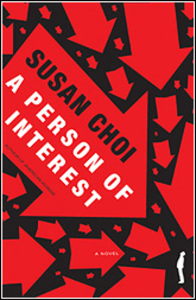 Lee closed the door and crept onto his bed. He hadn’t pressed the button of the lock; he was afraid he might be reprimanded. He heard the thump of feet and the shifting of objects. No one pursued him, to put a camera and microphone close to his face. No one needed to, having already captured him lunging and twisting in Morrison’s grasp and then crazily yelling, “It’s none of your goddamned business!”

The ceiling of this room, like the ceilings of all the rooms, was done in that same textured plaster that resembled acne. Lee stared at the irregular bumps as if he might find a pattern.

Through the thin walls, he heard Agent Morrison say, “Dr. Lee is a Person of Interest to this investigation. He is not a suspect. It’s as simple as that. We have never said he’s a suspect. If we ever do say it, you’ll know.”

“But what exactly do you mean by that, Agent? Is there some legal difference between the two terms?”

“Dr. Lee is a Person we’ve been talking to and who’s fully cooperating—”

“Is he going to face charges?”

“Look, this isn’t a briefing. You people aren’t even supposed to be here.”

“Can we expect him to be upgraded from a Person of Interest into a suspect pretty soon?”

Lee rolled his head back and forth, almost writhed in torment. In the kitchen his phone began ringing. He had been so swiftly dispossessed he felt a moment of childlike dismay that no one of the agents or TV reporters took the trouble to answer it for him. Who was calling? Was it Esther? He gasped, writhed, clenched into motionlessness suddenly. From where he lay, when he looked to his right, into the dresser’s mirror, he saw reflected the fissure between the edge of the blinds and the frame of the window that lay to his left. The two slivers of view, reflected and real, were entirely different; of course, this was the simplest geometry, the angles of incidence and reflection, but while the leftward view muffled itself in the bark of a pine Lee had planted for privacy a few years before, the rightward just managed to escape the pine’s boughs and run clear to the street. There a knot of spectators stood talking, one of whom, as Lee watched, suddenly turned and strode straight toward the pine, as if he’d realized, as had Lee at that instant, that the pine tree was protective only in concert with the basic respect neighbors grant to each other, and that today the respect had been breached with remarkable speed, perhaps permanently.

“I saw him out in the yard once,” he called over his shoulder to his less-bold companions. “I don’t know what the hell he was doing, digging holes in the middle of the night. Maybe burying things.”

In fact he’d been planting a Japanese maple, at the start of a summer that had been such a hell that he’d waited to dig until sunset. The delicate maple had scorched and expired within days, and then its slight skeleton, almost invisible from a few yards away, had remained memorializing itself for almost a year because Lee couldn’t bear to acknowledge his failure enough to uproot it; and the following spring he’d accidentally run into it with the lawn mower. But he was thinking of none of this now, as in a rush of pure instinct he twisted off the bed and fell hard on the side farthest from the window.

“Naw, nothing,” the man called toward the street, in a tone of apology.

Lee heard the man’s movement in the direction of the backyard but remained where he was, his heart clogging his throat. He’d lain stunned and still when the force of the bomb had thrown him. As if the mnemonic conditions were ideal for the first time in weeks, Lee remembered anew and with unsentimental precision the impact of the floor like a swollen heartbeat in the bones of his face, and the warm tongue of blood sliding over his own, and the inaccurate, passionless thought that he’d lost all his teeth. He had knotted himself automatically, like a fetus, he’d supposed then because he’d been bombed in his youth, and you never forget. But perhaps it was not a learned reflex but a species instinct—every animal curls into a ball when God’s fist thunders down.

It came to him that he’d been hearing engines departing, the dense babble of voices deflating. Now there was silence. He didn’t know how long he’d been on the floor. He got to all fours with effort and lingered there before standing up, with the feeling of baring his stomach to rows of sharpshooters. His hand lay for a while on the knob before somehow exerting the force that swung open the door.

He hadn’t imagined that his house, with its bare picture hooks, could look emptier. It looked roughed up and shaken down, raped. Bits of sod were mashed onto the stair treads.

The front door had been left standing open. When he went to close it, he found his across-the-street neighbor, the young mother of the toddler and hip baby, standing on his stoop, her face recklessly flushed.

“I just want you to know,” she said, as if they were lines she had practiced, “that I have two little children, and if you so much as think about them, I will make you regret it.”

Copyright 2009 by Susan Choi. Reprinted by arrangement with Penguin Books, a member of Penguin Group (USA) Inc., from A Person of Interest by Susan Choi.