A Higher Level of Solitude 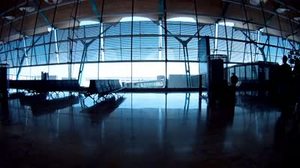 This piece was selected for the PEN World Voices PEN/Guernica Flash Series—one piece of flash every day throughout the festival. It’s also featured in the 2014 PEN World Voices Online Anthology.

Lamija Begagić’s event: Sex and Violence in Children’s Books: Where the Wild Things (really) Are

All things will someday take their proper place. One should know how to deal with patience.

– You haven’t got a pillow, have you?
– No, how could I have a pillow?
– A towel?
– That I’ve got, but it’s in the other bag.
– What am I gonna put my head on?
– Me.
It’s been three days since we’ve been trying to take off for Zagreb. For three days we’ve been trapped in the swirls of Sarajevan fog, breathing in smog, breathing out scorn for the city we are leaving for one not even worthy of scorn.
Sarajevo Airport. The prettiest little airport in Europe. Little waiting rooms, little people, big suitcases. The new year has just begun. People are returning from holidays in the old country, going back to their homes, though they refuse to call them homes. They say they’re leaving home, knowing full well they don’t live here anymore.
Sarajevo. The saddest little town in Europe. And the two of us, just as small, just as sad.
– Think it’s gonna take off?
– Nah.
– What are we gonna have for supper?
– Whatever.
– Should I stuff some onions?
– And cook them in what?
– We’ll borrow a pan.
– Well, if you fancy…
I don’t. I don’t fancy spending another night in the empty flat which hasn’t been officially ours for three days now. We’ve sold the flat in Sarajevo, and we should be happy. We’d decided a while ago we didn’t want to live here, we’d decided a while ago we’d buy something over in Zagreb. We’ve never had this much money in our account, we’ve never been so rich sitting in an airport waiting room. We’re so rich we’re splurging out on aeroplane tickets, collecting mileage for the airline raffle; maybe the flat we sold will someday take us somewhere far away. We haven’t got a pan in which to cook stuffed onions, we haven’t got a pillow to lay our heads on while we’re waiting to be sent back to our former home yet again. Every night an added bonus. Every night we reach a higher level of solitude, stripped down in the stripped down flat.
– Good that Mila didn’t come along. She’d miss her check-up.
– You really think we’re not taking off?
– No way.
– We should call your parents and tell them to take her tomorrow. The reports are in the second drawer.
– We should.
The Zagreb flat has a drawer for medical reports, one for uni certificates, one for bills. Into one of those drawers we’re going to put the loan papers from the bank. The whole of the Sarajevo flat will fit into one drawer of the Zagreb flat.
Good that Mila hadn’t come along. She is too small, maybe we would have lost her in the fog, like we’ve lost ourselves.
– Fucking hell, we had to. You know we had to.
– I know. I’m not complaining. I know.
If he were a smoker, he’d light one now. If he had a vice of any kind, this would be the right moment to get tempted. If he read newspapers, he’d walk over to the newsagent’s. He can’t do any of that, he hasn’t got a single excuse to get away from me.
– Why aren’t they announcing?
– They will, soon, I suppose.
– Shall we go home?
– What home?
He smiles scornfully. I’m only making things more difficult, and for that I’m sorry. I look through the window and don’t see very far. In this city you look more than you see, yet you can’t stop looking. I want to say it out loud, but I change my mind.
I finally accept the invitation to lay my head on his shoulder. I put my hand in his jacket pocket and play with the key to the flat. I squeeze it till my palm breaks sweat and the key brands the wet flesh. Now my brands are visible on my body, now I’ll never be able to hide that flat.
I close my eyes and imagine us floating high up while the money from our bank account, our miles for the raffle and all the papers from our Zagreb drawers are falling out of the aeroplane and into the gaping mouth of the fog.
They announce that the plane will not take off. The voice rings with apologies which don’t make it any easier for anyone. The airport building is emptying. I can feel we’re being left alone again.

This story first appeared in the collection Jednosmjerno (One-Way), published by Fabrika knjiga, 2010. It was the winning story for a short story competition organizeded by the magazine Buka in Bosnia and Herzegowina. This is the first appearance of Mirza Puric’s english translation.