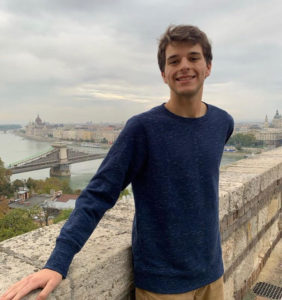 Jack Petocz is PEN America’s 2022 PEN/Benenson Courage Award recipient. Petocz, a junior at Flagler Palm Coast High School, hails from Florida. Petocz was launched into the public eye after organizing a state-wide student walk out against HB 1557, Florida’s “Don’t Say Gay” bill, in March, after which his school suspended him for handing out LGBTQ+ pride flags. The walk out helped catalyze a groundswell of protest at schools and beyond against the censorious legislation. Petocz has been loudly fighting censorship in his school district for the past year, including leading students in protest against the removal of George M. Johnson’s All Boys Aren’t Blue from the district’s school libraries. Petocz has written to Governor Ron DeSantis and Florida lawmakers, imploring those in positions of power to stop policing the education and identities of LGBTQ+ students. He has also spoken out publicly against his suspension, and his school’s dress codes. Petocz’s unflinching stance against censorship of LGBTQ+ identities reflects a growing outrage at hate, inequality, and marginalization. His voice is one of many inspiring the rising generation of activists to speak out. Jack is currently a political strategist at Gen-Z For Change, working on the midterm elections for the progressive non-profit.

ASIA KATE DILLON: Good evening! So inspiring to see, right? I am thrilled to be here tonight to present the PEN/Benenson Freedom of Expression Courage Award to Jack. This award, generously underwritten by Elyse and Lawrence Benenson, honors exceptional acts of courage in the exercise of freedom of expression.

I know the experience of, at a younger age, not having the language to describe the ambiguities and complexities of my identity. I’ve described how seeing words written on a page – in my case, on a script – opened up my understanding of how to be me in the world.

And now I hear from young people that seeing my character on Billions has helped them understand their own gender identity – and that this allowed them to feel less alone. And what’s more, I even hear from people who have actually set aside their phobias and hostilities, traded them for a more open mind after watching our show. For me, that demonstrates with such clarity how books, and screenplays, and creativity in other forms can make this world a better – and a safer — place.

But not if those books aren’t read, if they can’t be found on shelves in schools and libraries, if they can’t be discussed, if questions and differences can’t be explored. That is why what Jack and his fellow students are doing is so important. Mobilizing against bans and bigotry, contesting adults who attempt to impose narrow thinking on wide communities … standing up for the freedom to read and to learn and to find oneself in the pages of a novel … that is courage, and that is free expression in action.

PEN America’s support of young people who speak up, its institutes where students like Jack can learn about the First Amendment and the foundations of our precious right to protest, to debate and dissent … this work is crucial if we are going to have new generations defending our free expression rights in the years to come. For showing us how it is done, it is my great honor to present the PEN/Benenson Freedom of Expression Courage Award to Jack Petocz.

JACK PETOCZ: Good evening, I’d first like to thank Pen America for choosing me for this incredible honor. It’s so amazing to be here tonight surrounded by so many kind and inspiring individuals.

This year, I’ve been lucky enough to participate in Pen’s free speech advocacy institute. Through this wonderful program, I’ve met exceptional activists, ranging from fearless lawyers to imprisoned writers, who demonstrate the unwavering community fighting for first amendment protections across the nation and abroad.

In the past year, we’ve seen legislatures across the nation attacking marginalized communities. Women are losing their right to abortion, LGBTQ people are being minimized, people of color are being disenfranchised. Make no mistake, this is coordinated and will only continue to worsen unless we stand up, together.

I am proud to be a member of Gen-Z. We are a group of progressive, politically-engaged, and
dedicated change-makers, who will not and cannot stand idly by as lawmakers across the country strip us of our basic constitutional rights.

Instead of being allowed to focus on menial responsibilities such as schoolwork, my generation has been forced to rapidly mobilize and fight for our future.

Despite this incredible organizing, the world can only change if we change who is representing
us.

I, alongside Gen-Z For Change, am urging all of you to make your voice be heard in November. Not just by voting in local, state and national elections, but also by supporting young organizers working to guarantee a more progressive and democratic tomorrow.

Because if our collective voice couldn’t make a difference, then they wouldn’t be trying so hard
to silence it.