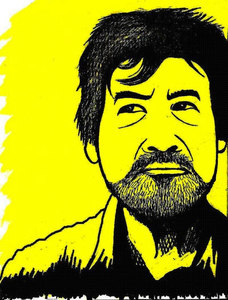 1992. New York and Los Angeles. The sound of a ringing telephone.

Filter HYH’s voice through an echo effect with feedback.

DHH: What happened to the connection?

HYH: Could you speak up? It’s hard to hear over this thing.

DHH: Then pick up the receiver!

HYH: I’ll turn up the volume.

DHH: Just pick up the phone!

HYH: She didn’t teach me how to work this thing.

DHH: Pick up the phone!

HYH: But that would turn off my speakerphone.

DHH: Your speakerphone is shit!

HYH picks up the phone. Sound effects out.

DHH: What’s that supposed to mean?

HYH: I said it was a good idea.

DHH: It’s only been three years since “M. Butterfly.”

HYH: But you been smart. Keeping your name in the newspapers. That’s good, son.

DHH: You mean, all that “Miss Saigon” stuff? Thank god, it’s finally starting to die down.

HYH: But so many articles on you. Free publicity!

DHH: But everyone disagreed with me!

HYH: Everyone! All the big-shot guys. Dick Cavett! Ed Koch! Here, wait, this one my favorite.

DHH: You saved the articles?

HYH: “I am ashamed of my union, Actor’s Equity!”

HYH: When I was working in a laundry, could I ever have dreamed? That one day Charlton Heston would write—about my son? I’m telling you, this is the land of opportunity. And that “Miss Saigon”—such a big hit.

HYH: Looks so beautiful. All those girls—classy.

DHH: You haven’t even seen the show!

HYH: But I saw pictures in the newspaper. That producer—what’s his
name—?

HYH: He talks about the musical—so beautiful!—a young Vietnamese girl who gives up her baby to find a better life inAmerica.

DHH: The girl—she kills herself. It’s her baby who finds a better life in America.

HYH: Dave, you should do something like that. Is that what your new play is about? Madame Butterfly set in Vietnam?

DHH: How could I possibly—it’s already been done!

HYH: See, I’m just so ignorant about these things.

DHH: Besides, I already wrote a play criticizing “Madame Butterfly!”

HYH: What play was that?

DHH: We’ve been over this.

HYH: When I come to New York next month, can you get me some tickets?

HYH: My good friend, Dick Buttress, Vice Chairman of United California Bank, he told me he was in New York last month, and he couldn’t even get a ticket! I told him, next time you go, ask my son.

HYH: I told him, my son, he knows the producer, they’re good friends, he worked on the show.

DHH: Dad, I protested the show!

HYH: What’s the difference? That McEnroe—

HYH: Mackintosh. He knows how much you’ve done for his show, and I’ll tell you something: he’s grateful to you.

DHH: Fine. I’ll get you tickets. I’ll get your friend tickets. Anyone you know who can’t get into “Miss Saigon,” just have them give me a call.

HYH: Thanks, son. But not right now.

HYH: What are you writing about?

The guy who wrote “The Jungle Book?” Kipling? I’m working on a play that deconstructs his life and work.

HYH: I’ll tell you the thing about “Miss Saigon.” You wanna know why it’s such a big hit?

DHH: A Vietnamese prostitute falls in love with some white soldier and kills herself so her baby can come to America?

HYH: You don’t know how much people want to come to America. I see that girl, and I think—she’s like me.

DHH: You killed yourself?

HYH: No, but I would’ve. That’s how much I wanted to come here. Even when I didn’t know anything more about America than I saw in Shanghai at the movies—even then, I knew my real life wasn’t the one I was living in China. Second son of a cheapskate father, who didn’t even know how to talk to his children. I knew that was a fake life, and my real life was here. All those movie stars—Humphrey Bogart and Clark Gable and Frank Sinatra—they were the real me. So when I finally got here, I kept on pushing. Until one day, after I started the bank and it became a success, I looked around, at my office on the 39th floor, my house the swankiest part of San Marino, my Mercedes, my kids all in top colleges—and I thought, now, I am finally living my real life—here in America.

That’s why the girl kills herself. Because when you can see your real life, and it’s someplace else, then what’s the point? If you lose hope you’ll never get there, then even if you kill yourself, it makes no difference.

DHH: I think I know what I want to write about.

HYH: Something besides that “Jungle Book” guy?