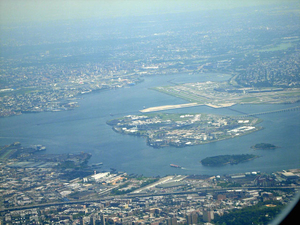 This piece was submitted by Deborah Clearman as part of the 2015 PEN World Voices Online Anthology. Clearman is a member of the PEN Prison Writing Committee. In addition to mentoring an incarcerated writer, she leads the NY Writers Coalition’s weekly creative writing workshop for women in jail on Rikers Island.

Deborah Clearman’s event: Writing on the Inside, Reading on the Outside: Exploring the Work of Prison Writers and Their Mentors

The first time I walked through the halls of Rosie’s—the jail for women on Rikers Island—I felt called. It was a long journey—over an hour by subway and bus just to get to the island, which is connected by a causeway to the borough of Queens right next to LaGuardia Airport. Once on the island my colleagues and I went through a processing center where our clearances were checked and we were given passes. Then we boarded a bus. There are five bus routes around the island, dropping correction officers, staff, lawyers, and service providers off at the ten different jails. At the entrance to Rosie’s, officially known as the Rose M. Singer Center, we left our cell phones in a locker, got our hands stamped with invisible ink, and waited for our escort officer. When he arrived, we put our bags through an X-ray machine, walked through a metal detector and entered the first of many gates. The metal bars shut electronically with a clang behind us; then the gate in front of us ground open. We followed our escort down an almost endless labyrinth of long hallways and worn-out linoleum, dodging puddles from a recent rain, passing bags of stinking garbage, officers fist bumping each other, lines of women shuffling by us on their side of a red line painted on the hallway floor. Through gate after gate. Windows showed a bleak courtyard with cracked cement, a basketball hoop, one dispirited tree. Down an even shabbier, more broken-down corridor off at an odd angle, to a door, where we left the building, walked around a patch of grass, and entered a trailer. Yes, the program called RIDE (Rikers Island Discharge Enhancement) was housed in a temporary structure up on blocks. The whole experience made me feel that the inmates had been discarded, like the piles of garbage in the halls.

We gathered in the RIDE trailer for a reading by women in NY Writers Coalition’s creative writing workshop, celebrating the publication of their first chapbook. My dismal mood turned to wonder as I listened to the poems and essays the women had written. I marveled that words of such raw power and beauty could have been produced in this grim setting. That was four years ago. Six months later, I took over leading that workshop.

In 2012 the workshop moved inside, into the Programs Corridor of the brand new jail annex built onto Rosie’s. The workshop opened up to detainees awaiting trials or sentencing, as well as sentenced inmates. We meet in a sparkling, sunny room that looks out on grass and sky, albeit surrounded by chain-link fence and razor wire. Every Tuesday at midday the women gather around a long table, anywhere from one to nineteen women—black, white, Hispanic, young and old. They come in noisy, greeting friends from different dorms, gossiping, complaining, shoving chairs around. I give each woman a couple sheets of lined paper torn from a pad and a stubby library pencil. We begin with a free write; I tell them to write whatever they want. Soon the noise dies down, and all I hear is the scratching of pencils on paper, and occasionally the jangling of an officer’s keys in the hall. They open their hearts and pour onto the page their anger, remorse, frustrations, fears, and hopes. I write along with them. Later I will give a writing prompt, but it is always a suggestion. They can write in whatever form they want: poetry, fiction, memoir, journal entry, rant. Those who want to will read their work out loud to the group. They write of homes left behind—South Carolina, Bucharest, Puerto Rico, the Bronx—of husbands and lovers and mothers and fathers they have disappointed or who have disappointed them, about God who gives them strength, and most of all they write about their children for whom they yearn. The writing can be imaginative, brutally honest, poetic, funny, deep; it is always moving. Here is a sample:

These are hard times for dreamers

(From These Are Hard Times for Dreamers, NY Writers Coalition Press 2015)

In the chaotic environment of jail, the writing workshop provides an island of quiet and reflection. The women have time to express their emotions and be alone with their thoughts in a productive way. Writing together and sharing their work they form bonds. They listen to each other with respect and often with awe. Their voices are heard. They see their words on the page. For any writer this is an empowering experience. I treasure my part in this experience.