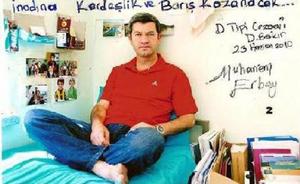 The release pending trial of writer, human rights lawyer, and PEN Turkey member Muharrem Erbey after four and a half years in pre-trial detention was long overdue, PEN International said today. Erbey was released along with 47 others, who were being tried as part of the Kurdistan Communities Union (KCK) trial. Erbey had been held in pre-trial detention since his arrest in December 2009.

Speaking to PEN, Muharrem Erbey said, “Speaking as a lawyer, I don’t understand the legal grounds for either my arrest or my release. The decision to release me was made under very unusual circumstances ahead of my scheduled hearing on April 14 [2014]. As these are political trials, decisions seem to be taken according to the political climate at the time.”

Erbey also thanked the PEN community for their continued support: “I would like to express my deepest thanks to all the PEN members who sent me letters and postcards. I received messages from around the world, including countries like Ghana, Mexico, Canada, and the UK. Those messages were tremendously important to me; they were what kept me going. I am starting an English language course to continue my correspondence with those who wrote to me now that I’ve been released.”

PEN welcomes the news of his release and extends its thanks to its members for their support, and for tirelessly campaigning for Muharrem Erbey in recent years.

PEN calls on Turkish authorities to immediately and unconditionally drop all charges against Muharrem Erbey, and to fully meet its obligations to protect the right to freedom of expression as laid out in the International Covenant on Civil and Political Rights and the European Convention for the Protection of Human Rights and Fundamental Freedoms, to which it is a state party.

Erbey has worked for many years as a highly respected human rights lawyer and advocate in the southeast of Turkey, compiling reports on disappearances, torture, and extra-judicial killings in the region, and representing local individuals in provincial, national, and international courts, including the European Court of Human Rights. In addition to his work as a human rights lawyer and advocate, Erbey is also a published writer, editor, and columnist, and has written numerous articles on culture and human rights for a wide range of magazines, newspapers, and websites.

PEN has been campaigning for Erbey’s release since his arrest in 2009 and throughout his pre-trial detention. As part of these efforts, Muharrem Erbey was chosen by PEN International as one of the focus cases for the Day of the Imprisoned Writer in 2012, and was brought to the attention of the President of the Republic of Turkey during an official meeting in November 2012.