What Would Vladimir Putin Do? 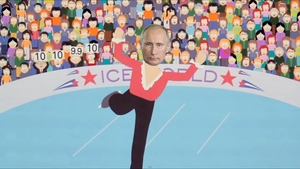 The world has now descended on the Black Sea resort town of Sochi for what could be described as an every-two-year blitz of sports diplomacy—18 days of international solidarity to watch men and women performing at humanity’s physical (and sometimes, hopefully, spiritual) best. But Russian President Vladimir Putin is asking us to ignore the obstacles the host country has placed around the track of human rights in the name of the Olympic spirit.

The great Olympian Brian Boitano, now out publicly, was in Sochi as part of the United States’ official delegation and official response to Putin’s anti-gay “propaganda” law. It’s the perfect time to ask, what would Brian Boitano do? He’d fight the evil robot king and save the human race again. Of course.

So let’s talk a little about free expression.

What would Vladimir Putin do
If he was here right now?
He’d crush some rights
And he’d follow through,
That’s what Vladimir Putin’d do.

When Vladimir Putin was building the Olympics,
Trying to be cool,
He jailed activists and a billionaire
Just to say “fuck you.”

When Vladimir Putin was in Moscow
Fighting LGBT,
He used his magical fire breath,
And killed freedom of speech.

How would you end the song? Send your parody lyrics to us at PEN, or Facebook or Tweet us @PENamerican.

‘Cause that’s what Brian Boitano’d do.

Many of you saw statements released by @dramatistsguild @tcg @bardsta & @penamerica and posted in support of our artistic director Nataki Garrett.