What I Want to Be When I Grow Up 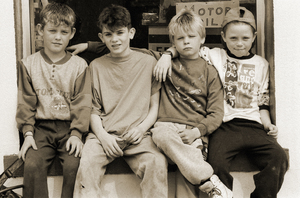 This piece was submitted by Cormac James as part of the 2015 PEN World Voices Online Anthology.

I’d like to be a professional footballer, in the Premiership. Not for the money, it should be said, even if that kind of money seems more and more like a cure-all to me, these days. And not for the fame either, which in all honesty must be a burden more than a boon, unless you’re a particularly narcissistic kind of person, which I often wish I was but unfortunately am not. And not for what comes with the fame, namely sex-stroke-women and all that side of things—a chance to live in that other world, where the women are all their own competition and you’re the prize—because wouldn’t anyone whose curiosity is anyway ingrown suspect the attraction, that it’s because you’re young and fit and rich and famous and nothing else, and will wither as soon as you get any bit fatter, poorer, older—as soon as you stop being a professional footballer, as it were, and start becoming merely yourself? And not to feed any narrow personal fantasy of a well-oiled life—one where everyone you’re ever introduced to, for instance, already knows your name, and no look on any face ever has you trapping your breath in your hands, to see does it stink of shit. And not in deference either to any exceptional talent, which I can assure you I never had, except in my own head. And not because I particularly love the game, which I don’t. I’ve never been a fan, even growing up. I used to play hurling and Gaelic football at school, of course, like every Irish kid, but my best memories are of when I was fourteen and fifteen playing basketball in the village juniors with my friends. We got hammered week in week out, but still turned up every Saturday morning at the Esso station and all piled into the back of Teddy Casey’s HiAce, and he’d drive us into Holyhill or Glanmire or Neptune Stadium at full tilt, all strapped in he’d shout over his shoulder, the old joke, and not a seat or a belt or even a handle to hang onto in the back, the mad handbrake turns round the corners hopping us off the walls, and all of us bellowing, Teddy you faggot that the best you got, blow winds blow I think now, is it you getting old Teddy or is it the van, the whole gang of us bouncing round like drunks in a barrel, Christ Teddy give her some juice, time to give someone else a go at the wheel, you’ve had a good run but shove over now there’s new blood coming up, he’d have her flat out hitting the lights then jam on the brakes and we’d all pile screaming and roaring head over tit into the front, three and four faces suddenly stuck to the windscreen, noses pressed to a sweetshop window I think now, and before we’d a chance to untangle he’d be off again, pedal to the floor, somebody’s leg still sticking out the window, somebody’s elbow in your ear, someone at the bottom of the heap shouting you’re killing me, you’re crushing me, I can’t breathe, someone shouting look lads Packie’s ferreting again, and Teddy roaring I can’t see the road, there could be a truck, and us stacking ourselves high as we could on Packie’s back, to shove his head down even further into Teddy’s lap.