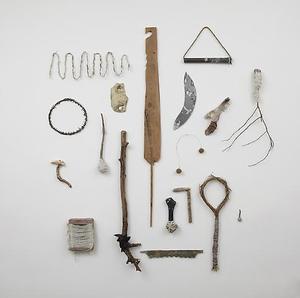 This week in the PEN Poetry Series, guest editor Cathy Park Hong features a poem by Aaron Kunin. About Kunin’s work, Hong writes:’ Went the Day Well?’ (which was inspired by Shakespeare’s Richard III) is both a procedural experimentation on typography and an uncompromising morality play on guilt. What’s remarkably striking is Kunin’s uncanny use of quotation marks, which track his repeated words and phrases, highlighting prepositions, conjunctions, and pronouns. Unlike the glib irony of overused scare quotes, the punctuation’s effect in ‘Went the Day Well?’ is disarming and relentless, functioning as a stress that directs us how to read and hear the words. Each repeated word gains a legible musical force and focus. We begin to rethink ‘the’ articles ‘and’ conjunctions that invisibly hold our language together. The address to the second person becomes especially cutting as the ‘you’ forms into a player standing trial. Even after multiple readings, I was utterly haunted by the power of this poem.”

You were responsible for her
Death. “You” wished “her” dead, and she died
As all will die whose deaths “you” wish
“As” well “as” those
“Whose” lives “you” would spare, so their “deaths”
Are your fault too

Because “you” failed them. Add to “them”
Others killed through “your” negligence
Under “your” sign, on “your” behalf
“Those” abandoned
Or never adopted by “you”
“To” “you” also

The guilt of “those” who “were” “your” tools.
Confronted “by” “their” faces, legs
Arms “and” voices joined together
“Their” work not done
Dishes in “the” sink, undischarged
Obligations

“You” don’t even recognize “them.”
They look like different people.
If there remain some few “whose deaths”
“You” did “not” cause
Think about what “your” ancestors
“Did” “to” get “your”

Let “my” “guilt” “cause” “my” “death.” “Never”
Quite convinced, artist “of” bourgeois
“Guilt,” that “nice things” “are” nicer than
Nasty ones, learn
“To” enjoy atoning “for” “your”
Inheritance