View on an Accident 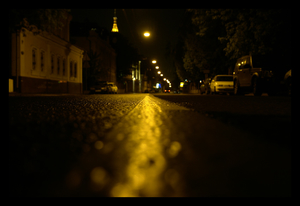 This week in the Guernica/PEN Flash Series, we feature a piece by Mieke Eerkens. Subscribe to the Series and get fresh new stories delivered to your inbox twice a month—no spam or news, just stories.

View on an Accident

In the morning I will send you back into the ether. Tonight I sit on the couch at the window watching the occasional cars in the dark, red light washing across my living room wall when they hit their brakes at the stop sign. Yesterday on that same corner, a young man on a motorcycle was hit by a car. I heard it happen: the familiar shriek of tire on asphalt, the crunch of impact. The young man was thrown several feet to the grass beside the road, and he lay there cursing. When I came to the window, his motorcycle was lying on its side hemorrhaging gasoline and oil. It spread in dark rivulets. The driver of the car got out and walked in a daze to the man in the grass with a cell phone to his ear. Then the police and the ambulance and the tow trucks came, just like the other accidents on this corner before, and there was a period of urgent commotion. After they carried away the broken vehicles and people, men in bright orange vests with shovels and sand came to cover up the leaks, spreading the granules out over the greasy dark spots with rakes.

Today, only the sand was visible in the street, just there, soaking up the slick, and only if you knew it, only if you knew to look right at the place where it happened. Others cars drove over the sand and they carried it away in the crevices of their tires all day: to their work, to the supermarket, to the dentist, to the gym.

Tonight I will not sleep. I will wait for morning to come when he will pick me up. Until then, I will sit in the ache of my resolve, looking out at the light falling on the asphalt with its fading sand patches, watching that light dissolve into the night as I move my palm over your subtle rise, watching cars, telling you things you won’t ever hear.